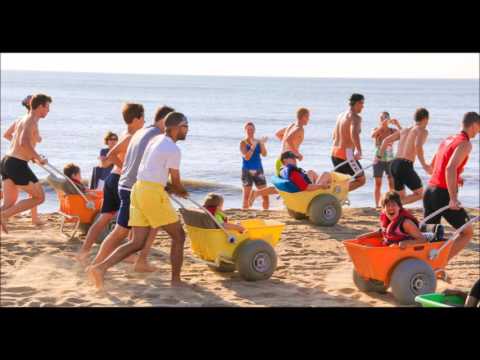 Raised by 40 people in 3 years

Qualifying for the Boston Marathon was difficult because Michael had to ensure that his guide runner for his qualifying race did not assist by touching the chair during forward movement.  Michael also had to ensure that his guide runner only provided verbal directions during forward movement and did not in any way power them during the course of their other race.  Their first attempt at a qualifying time was at the 2016 Marine Corps Marathon.  Michael's good friend Major Kim Rooster Rossiter assisted them in training runs as well as a guide runner for the race itself.  This race was intended to be a training run.  Although they did not achieve a qualifying time, it proved to be a good test for their actual qualifying race.

Michael and Ashton achieved their qualifying time during their second marathon at the 2017 Shamrock Marathon.  They attempted several training runs prior to their qualifying race.  On a day with great weather all the training runs were going pretty well.  However, at the Shamrock Marathon a cold front came through, dropping the temperature to the 30s for race day.  There was rain/freezing rain, sleet, snow, and sand for a half-mile that had blown onto the concrete road at mile 22 accompanied by 40 mph winds blowing in the other direction.  They ended up finishing with a qualifying time of 4:51:25.  Michael and Ashton are very excited to run for the Hoyt Foundation and make history as the first legally blind runner pushing a rider-athlete with a disability.

Rick Hoyt was born in 1962 to Dick and Judy Hoyt. During child birth, Rick's umbilical cord was wrapped around his neck cutting off the supply of oxygen to Rick's brain. He was diagnosed as a spastic quadriplegic with cerebral palsy. Doctors advised Dick and Judy to institutionalize Rick, as he would be a vegetable for the rest of his life. Dick and Judy refused and brought Rick home.

Dick and Judy could tell that Rick comprehended his surroundings, even though the medical doctors continued to insist Rick was a “vegetable.” In 1972, the Hoyts raised $5,000 through bake sales, a local dinner dance and donations from friends and family. They paid that amount to a group of skilled engineers at Tufts University that built an "interactive computer" for Rick. Rick was able to see the letters of the alphabet and select the ones he wanted by pressing a pad on the headrest of his wheelchair with his head, the only part of his body he can move voluntarily. The first words Rick ever "spoke" were "Go Bruins!" The Boston Bruins were in the Stanley Cup that year and it turned out Rick was a Bruins fan.

In the spring of 1977, Rick told his dad that he wanted to compete in a 5-mile road race to help raise money for a lacrosse player who had been paralyzed in an accident. Dick, a non-runner at that time, pushed Rick for the full 5 miles. The pair finished next to last, but not last. That night, Rick typed "Dad, when I'm running, it feels like my disability disappears." That was a powerful message for Dick, and that is where it all started.

On April 8, 2013, a life-size bronze statue of Team Hoyt, commissioned by John Hancock, was unveiled on the lawn of the Center School in Hopkinton, just yards from the starting line of the Boston Marathon. The statue was unveiled in a 30-minute dedication ceremony. When asked about the statue, Dick said, "It doesn’t get any better than that. To us this is the Stanley Cup, this is the World Series.”

Then on July 17, 2013, Dick and Rick received the Jimmy V Perseverance Award at the 2013 ESPY Awards. The Jimmy V Award is given to those individuals in athletics who have overcome great obstacles through perseverance and determination. The award couldn't be more fitting, with Team Hoyt's motto being, Yes, You Can!" Dick and Rick were presented the award by Boston native Ben Affleck. As the Hoyts made their way across the stage, they were greeted with a standing ovation by the room full of esteemed athletes.

On Monday, April 21, 2014, Dick and Rick Hoyt ran their 32nd and final Boston Marathon together.  Last year, on April 20, 2015, history was made when long-time Team Hoyt teammate Bryan Lyons ran with Rick in their first Boston Marathons together. They returned again in 2016 and 2017, and now on April 16, 2018, Rick and Bryan will run their fourth Boston Marathon together. They will be joined by a team of carefully selected athletes from Canada and across the United States to form the 2018 Team Hoyt Boston Marathon Team. The team will be running to raise money for the Hoyt Foundation, Inc., an IRS 501(c)(3) charity whose purpose is help integrate individuals with disabilities into everyday activities so they may live fruitful and productive lives.

The Hoyt Foundation gives gifts each year of $30,000 to the Easter Seals of MA programs and to Children's Hospital Boston- Augmentative Communication Enhancement Program. The Foundation also makes various donations to camps for the disabled and therapeutic horseback organizations in the Massachusetts area.

Raised by 40 people in 3 years