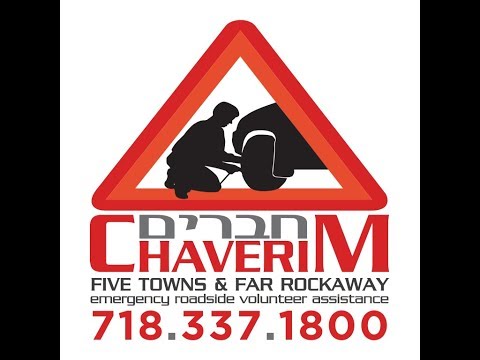 You‘re running late, about to drive to work, when you sadly realize that the keys are locked in your car. As the gas light on the dashboard glows, you desperately search for the closest gas station, but, don’t make it. The pothole you hit not only knocked you around in your seat, but also knocked all the air out of your tire.**Who do you call?Chaverim of the Five Towns and Rockaways.**Chaverim 5T/R is a 100% volunteer organization.It was created to aid people with minor car problems and has grown to help people in many tough situations. Chaverim 5T/R responds to typical calls ranging from keys locked inside vehicles, flat tires, cars not starting or out-of-gas, to some unconventional emergencies such as homeowners being locked out of their house or pulling a car out of the sand.Members of Chaverim 5T/R start their day as early as the first neighborhood risers in the morning, and end as late as the last person getting home.In other words, it is a 24/6 organization. All of the members offer their time and services because they care and want to help a neighbor in need. No compensation, simply pure chesed.It all started one day about fifteen years ago when someone from Far Rockaway was in Brooklyn and locked his keys in his car. He was amazed that there was an organization called Chaverim that came to his immediate help. He took this as a sign that perhaps he should start a Chaverim locally. A few dedicated people from Far Rockaway got together and eventually founded Chaverim of The Five Towns and Rockaways.Since its start, Chaverim 5T/R has quickly grown to cover thousands of calls a year and is continuously expanding the work they perform. They are recognized by both the New York and Nassau County Police Departments.When calling Chaverim 5T/R, the first line of help is offered by one of the 30 volunteer dispatchers. A detailed message is sent out to all of the 75 members to find who is the closest and most conveniently available. At times, an additional volunteer is needed for backup assistance, and in urgent cases, such as a child locked in a car, all available members drop what they are doing and run to help as quickly as possible.Members of Chaverim 5T/R are not professional mechanics or locksmiths. They are college students, store owners, businessmen, yeshiva bochurim and the like. They are your neighbors and your friends. The only criteria for joining Chaverim is to not be scared of getting some grease or dirt on your hands and a great desire to give aid to others in need.Even if a member only has free time before or after classes, after work, during his lunch break, or on weekends, he still decides to dedicate that precious free time to being there for the community at large.2019 was a very busy and successful year for Chaverim.We received over 3,500 calls, a record for Chaverim, with over 90% of the calls being responded to in 5 minutes or less.In order to better serve you, we need to cover our budget and get new equipment.People calling Chaverim 5T/R end up saving time and money. Not only is there no charge, but help usually comes much faster than if they would have contacted professional services.As with any volunteer service, there are still expenses that must be met. Equipment for members and software that is used for dispatching are the main operating costs.**Chaverim 5T/R has been very fortunate this year to have had some financial support from Gourmet Glatt Emporium, Plaza Auto Leasing and TECH613 as well as a few other local organizations. Nevertheless, the majority of the much needed funding must still come from local contributions. Monies are needed to enable the organization to survive and hopefully continue to expand.There are many stories that depict the hard work and dedication of Chaverim 5T/R; however, some are not as typical as others. Dispatch once sent out a desperate call from a woman who, after going onto the balcony of her apartment with her children, noticed that the door suddenly locked behind them. Many members raced over to the scene. One member was trying to open the front door while another responder decided to take the stairs up to the roof and see what could be done from there. A ladder was then lowered down to the balcony, followed by him climbing down and eventually getting the door open to let the family back inside. In the end, about ten members were on the scene to help.Another case involved a call in the middle of the night. A car was stuck on the sand in Long Beach. The owner initially called a tow truck, but declined their services when he realized he did not have enough money to pay them. By the time Chaverim 5T/R was called, he was exhausted, almost out of gas, and simply willing to forget about his car. He just wanted a ride to Far Rockaway. At 5am, a member arrived on the scene and was able to use his own SUV to pull out the car, allowing the driver to get back home to New Jersey that morning.The name says it all. Just like you would not hesitate to call a friend, do not hesitate to call Chaverim, your friends, when you need assistance. All that we ask is that you help support us so that we can continue to help you in your time of need.**We also run 5-6 "Defensive Driving Class" programs and 2-3 car seat safety inspection events throughout the year.To contact Chaverim,call 718-337-1800visit www.chaverim5T.org, email us at info@chaverim5t.orgor send correspondence toPO Box 701,Lawrence, NY 11559.CHAVERIM is a 501c3 100% volunteer organization.


Posted by Chaverim of the Five Towns and Rockways, INC

Give us a BOOST so we can BOOST you