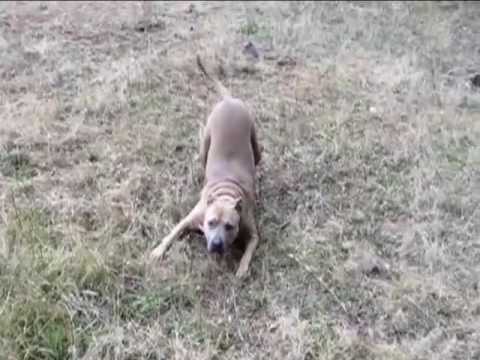 Lucy (fka LuLu) needs more surgery. She has a long story, all jammed into less than 3 years. She arrived at Downey shelter in LA, CA, in May 2016. She had been badly injured  - hit by car? shredded by big cat? who knows?

She was dumped by her former owner with massive festering wounds all over her body. While there, she underwent 4 surgeries over the next month to clean up and treat her wounds. We pulled her on June 30, 2016. She came to us in Oregon, and her soft tissue wounds continued healing. She was very lame in the right hind leg; examination showed she had ruptured cruciates in both knees, the right being worse. She got the first knee fixed (TPLO) on September 27, 2016, after all her infections had cleared. On her preop exam for the second surgery a few months later, a mast cell tumor was discovered. We paused the orthopedics briefly while she had that tumor removed. She had her second knee done on June 26, 2017. On June 28, 2018, she had a lipoma over her right carpus (wrist) partially removed. It was big enough to interfere with her walking.

Lucy is the best kind of ambassador for pit bulls - everybody she meets is her new best friend. Everyone loves her, too.

Today's news: The wrist bump is back, and so is the mast cell tumor. She is scheduled for surgery on Tuesday, 4/23/2019. We need $1000 for tumor removals, and a dental cleaning and removal of a problematic fractured tooth. The tooth was one of her original injury issues, but wasn't a problem until now. Given she has orthopedic hardware in place, big gun IV antibiotics will be needed for the dental.

Today's bill was $251.95 for Lucy and Maltese girl Alyssum (xrays for back and knee pain.) Plus $1000 for Lucy's work next week, and we also need about $250 for follow-up lab work on Bruno, our miniature & German pinscher mix with Addison's disease. It's important to monitor his lab work because it can go bad quickly with this disease.