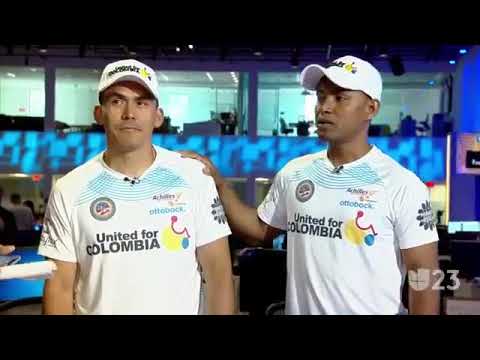 Raised by 30 people in 2 years

Join UFC in supporting Colombia's once-wounded soldiers who are now ATHLETES with Victory on their mind!

These athletes have overcome life-changing physical and mental challenges through their passion for this sport. The performance of these warriors in each race greatly depends on the care and infection prevention of their injured limbs, and appropriately managed logistics. For this reason, we are raising funds to continue our efforts of sponsoring their travel, accommodation expenses and care kits associated with their participation in the Miami Marathon this January 27th!

GET TO KNOW some of the 12 Colombian amputee athletes that will participate in the upcoming Miami Marathon:

Harlen Ospino, on May of 2008 during a military operation against a guerrilla group Harlen stepped on a landmine field and lost both legs. UFC has sponsored his prosthesis since then. In 2018, UFC gave him the specialized running prosthesis to debut in the Miami Marathon. Harlen belongs to the Antioquia´s para-athletes team and is pre-classified to participate in Tokyo 2021 Paralympic Games.

Fabio Rendon, on July 2008, Fabio was Regular Soldier in the Colombian Army, during an operation in the state of Nariño, Fabio stepped on a landmine and lost his left leg. Last year, Fabio joined the Paralympic team in Bogotá and he is pre-classified to participate in Tokyo 2021 Paralympic Games. Fabio ran his first half marathon in Miami in 2:06:54. This year he aspires to run it below the 2 hours.

Jhon Montero, in 2008 stepped on a landmine in a military operation in the state of Huila. After retiring from the Army, he studied Graphic Design and works in a Call Center in Bogotá. This year Jhon is excited to debut with his running blade in the Miami Marathon and aspires to significantly reduce his last year result (2:42:50) when he ran with a conventional prosthetic leg.

Camilo Diaz, on July of 2008, during a military operation on la Uribe, Meta, Captain Diaz stepped on a landmine and lost his left leg. After the accident, he retired from the army and became a Lawyer. He lives in Bogotá with his son and wife. UFC has sponsored his prosthetic leg since that date. Last year, Camilo got a professional running prosthesis from Ottobock and became his ambassador.

United for Colombia is a 501(C)(3) tax exempt non-profit organization and your contribution is tax deductible.

Should your generosity exceed our expectations, United for Colombia will use additional funds towards Otto Bock high-tech running blade prosthesis and prosthesis maintenance for our beloved athletes.

Posted by UNITED FOR COLOMBIA

Raised by 30 people in 2 years