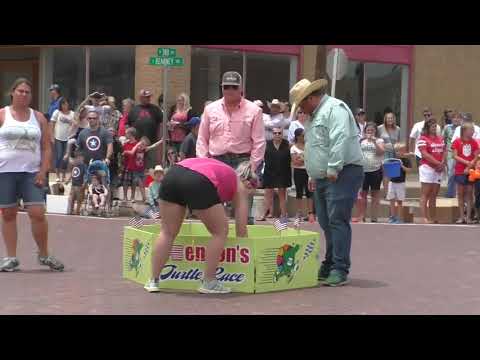 It is not a well-known fact, but every year thousands of wild turtles, mostly North American box turtles, are stripped from their natural habitat for turtle races. These so called ‘family-friendly’ events have a dark side that involves environmental damage and animal mistreatment happening on a massive scale. We have documented over 600 races, some of which have had more than 400 box turtles entered. We suspect the average is around 60 turtle per race, which implies that tens of thousands of turtles are taken from the wild every year. But this preliminary information needs to be validated with a rigorous scientific study.

These races – in which wild turtles are placed in a painted or chalked circle on the ground, with the first turtle exiting the circle declared the winner – are extremely popular and are held annually at county fairs, Independence Day celebrations and town festivals in rural areas and are usually billed as family friendly, children’s events. Organizers of and participants in turtle races have little to no knowledge of turtles and severe abuses occur. Whether it is overcrowding, injuries caused by children dropping turtles, overheating, painting of turtle shells, poor husbandry, unsanitary conditions, the intentional relocation of turtles away from their original habitat (which is extremely harmful to wild turtles) or the use of protected and/or endangered species, these problems are pervasive across races.

The Turtle Race Task Force (TRTF) – which is composed of conservationists, wildlife biologists, science teachers, zoologists, veterinarians, science writers and concerned citizens – is a 501(c)(3) non-profit through our partnership with the Colorado Reptile Humane Society (CoRHS). CoRHS is an animal welfare organization founded in 1999 and they run an animal shelter, as well as advocating for animal welfare and educating the community. They are providing TRTF with guidance and technical support and will hold the funds raised for the project.

We are planning a three-phase project to address the turtle racing problem. Phase I will consist of a one summer investigation (2021) into turtle races where volunteers will attend as many turtle races as possible to determine how many turtles and what species are being used and document each event, including any animal abuse. Phase II will consist of a health and disease investigation. In Phase III, we will launch a major publicity campaign using data and information gathered in Phase I and will work to get turtles races either heavily regulated or banned at the state level.

Your dollars at work

When you donate to this effort, your dollars will go directly to getting our volunteers to races. Many of our 85 volunteers will be attending multiple races, and we want to provide small stipends to cover gas and other expenses. Since many races are held during the heat of the day on concrete or asphalt, we will provide volunteers with infrared thermometers so they can document the ground temperature where the turtles are being raced.  During past races, temperatures have been documented at over 130F! (This is the same temperature at which a dog may perish in a locked car.) Photo documentation is also an important component of this project, so we will provide volunteers with cameras if they don’t already have appropriate ones. Any funds raised beyond our needs for Phase I will be used for later phases of the project.

Since 1924, when the first modern turtle race was held in Oklahoma, turtle races have been operating essentially unregulated. Though it appears that tens of thousands of wild turtles are swept up by these events annually, creating a significant animal welfare and environmental problem, the issue has remained largely overlooked. The Turtle Race Task Force represents the best chance at changing the status quo. We hope that within a few years we can reverse the current situation, and end most of the turtle races presently ongoing. This will have an immediate and considerable impact on the conservation and welfare of wild turtles in the United States.