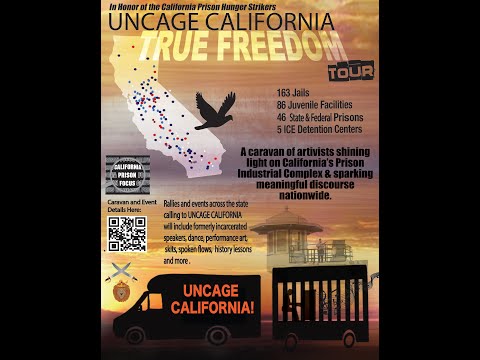 We will be promoting the critical legislative and policy-oriented campaigns of our allies, and also be organizing open community solution-oriented dialogues are being organized along the way at Humbolt University, Ca Poly, UCLA and in San Diego, as well as more impromptu dialogues that will take place. Watani Stiner will be facilitating these dialogues in collaboration with local organizers. Various organizations are joining in to organize events all along the route.  (Go to www.prisons.org to read more details about the caravan and events.)

Prisons, jails and other detention facilities:

are Genocidal. According to Human Rights Watch, in California, the percentage of inmates 55 or older increased by over 500 percent between 1990 and 2009 even though the likelihood a person will commit serious crimes declines with age. In 2015 over 16, 826 people in California state prisons were over 55 years old. According to the Prison Policy Initiative “All older adults are at greater risk for complications from COVID-19, which threatens to turn their prison sentences into death sentences.

eat up over 5 billion tax dollars a year in California, while many colleges have recently been forced to close their doors due to financial shortcomings.

rarely healing nor rehabilitative. Detention facilities often return people to their communities more hurt or dysfunctional than when they arrived.

are often dehumanizing, repressive, and corrupt.

create and perpetuate racial divisions and violence. They perpetuate poverty and inequality.

increase rates of suicide, depression, PTSD and domestic violence amongst guards and within the communities they are located.

feed into a culture of racism, police brutality, militaration, hate and violence.

have been found recently and in the past to sterilize women without their knowledge.

cause intergenerational harm within families and communities.

are a product of the same capitalistic structure that has led to global warming and environmental degradation.

are environmental disasters for the towns where they are built, and hazardous for those within.

subjects LGBTQ individuals and others to hostile environments.

are unconstitutional, violating basic human rights such as due process, freedom from cruel and unusual punishment, discrimination, and access to a constitutional level of medical care.

are expensive, cause massive suffering and create an insurmountable obstacle to social progress.