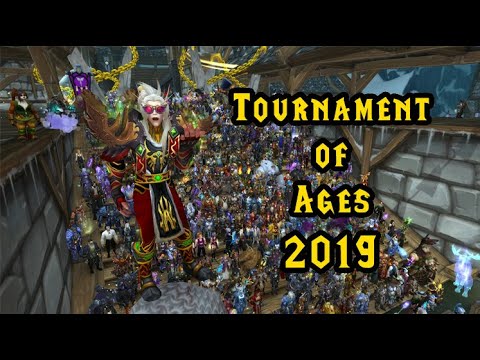 Raised by 51 people in 2 years

Set your donation name to your in-game name or Discord to be reached about winning!

Drawing is Saturday the 9th at 8pm Moon Guard time, at Twitch.tv/ToAFairgrounds

For the past five years that the Tournament of Ages has run, hundreds  attended, blogged, posted and told their friends about it. It wasn't  just Moon Guard that came, other Roleplaying servers found their way to  the Argent Tournament Grounds to partake, and for 2016's ToA, Tendael  and Aeriyth found themselves wondering if the Tournament could draw  attention to Blizzard's favourite real-life foundation, Make-A-Wish. It  was a success, with over $1,000 raised for the Make-A-Wish Foundation,  and so we've continued that tradition. 2017 saw the same result, with  over $1,000 raised for the USO. 2018 saw us fundraise for Direct Relief, a humanitarian non-profit with an amazing reputation for  providing life-saving aid to victims of natural disasters and other emergencies, as well as medical aid to impoverished around the world - and we raised over $2000! Now we set our sights upon another enemy of Love and Happiness; child poverty.

This year, we hope to raise $1,000 for Red Nose Day, a fund that set out to eradicate child poverty on an international scale, and its champions were agents of fun and laughter. Every child deserves safe and secure access to food, water, education, and perhaps most important of all - laughter and play. As the Tournament comes together for a week of merriment and cheer, let us once more turn that force of good to a cause that deserves it.


Posted by Tournament of Ages Hearthstone

Raised by 51 people in 2 years