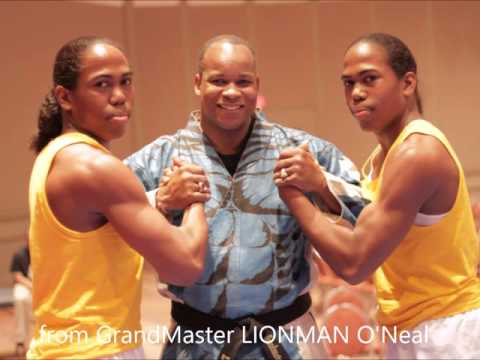 LIONMAN Foundation is one of the World’s fastest growing organizations with over 30 million members and an expected 50 million new members through our partnership with SHAPE America.

LIONMAN Foundation CEO GrandMaster Eric “LIONMAN” O’Neal, Sr. founded the 501(c)3 nonprofit in 1990. He is a 7 time U.S.K.A. World Karate Champion, Goodwill Games Gold Medalist, International Karate Hall of Fame member with the Legendary Bruce Lee and a Masters Karate Hall of Fame member. He holds a Bachelor of Science degree in Accounting and he is an avid entrepreneur, who owns a publishing company that he established after authoring a series of 28 graphic novels. He established partnerships with The White under the administration of President Barack Obama working closely with him and First Lady Michelle Obama’s Let’s Move! Initiative. He became a partner of the Bill and Melinda Gates Foundation after receiving a special invitation. He is a dynamic keynote speaker and a celebrated authority on sports and fitness impacting the lives of millions of people for decades. As one of GOD's Human Instruments (GHI) he has devoted his life to fulfilling his promise to GOD to serve and save our youth. His personal accomplishments make him a living example of the success our young people can achieve, and more importantly, how to achieve that success.

GrandMaster O’Neal is the 7th of 8 sons and 1 daughter raised by a single mother in the Desire Housing Project during the 1960’s – one of the most turbulent eras for Desire.

Poverty, drugs and street hustling ravaged the community, and violent attacks from law enforcement on the Black Panthers rendered death and destruction of families and property.

Applying the principles of discipline, focus and hard work learned from his Mother Mrs. Gloria O’Neal, and Martial Arts instructor GrandMaster Ferdinand Bigard, to other areas of life, GrandMaster O’Neal became an accountant, computer programmer, marketing executive, and acquired his real estate and insurance licenses. In corporate America, he broke sales records for Minolta Corporation and ITT Insurance Company, developed his own MCS computer program for the Hilton Hotel that is still in use today, and was soon-after enticed to bring those talents and skills to the Windsor Court and LeMeridian Hotels.

His Martial Arts accolades include the U.S.K.A. World Karate Championship Title that he won 7 times, and the Long Beach International Championship Title that his idol and dear friend, GrandMaster Jim Kelly also held. He was personally invited to join Team USA for the 1998 Goodwill Games in Cancun, Mexico where he brought home 2 Gold Medals and was voted “Most Outstanding Competitor.”

In 1986, he founded BLUE LION Karate Academy which became the largest, most successful commercial Martial Arts school in the southeast region. BLUE LION’s emphasis on self-discipline and education has helped to transform the lives of more than 40,000 students, including Sensei Dr. Al Gourrier - the youngest president of a national bank, Sensei Chief Eddie Compass - NOPD Chief of Police who secured the City during the chaos of Hurricane Katrina, and one of the top stunt coordinators and fight choreographers in Hollywood todayMaster Larnell Stovall, to name just a few. GrandMaster O’Neal also owned Toys, Toys and Mo Toys - a chain of 3 toy stores before Hurricane Katrina.

After Hurricane Katrina destroyed all of his businesses, GrandMaster O'Neal bounced back with LIONMAN Foundation, Inc. Originally founded in 1990, LIONMAN Foundation builds partnerships and sponsors programs to instill Discipline, Education and Fitness.

One of the first partnership withDisney’s Martial Arts Festival was like American Idol meets Martial Arts. The Legend Of LIONMAN Seven YoungAmerican Heroes 20 city tour highlighted the brightest young talent in Martial Arts while encouraging young kids to read more. LIONMAN Foundation was the first company allowed to post the Disney logo on its’ website.

While partnering with Disney’s Martial Arts Festival, GrandMaster O’Neal was contacted by a member of First Lady Michelle Obama’s administration and invited to attend a conference at the White House. In 2011 he committed himself to building a stronger and healthier America after learning the astonishing facts of obesity and it’s effect on our National security. LIONMAN Foundation has partnered with The President's Council on Fitness, Sports and Nutrition, The First Lady's "Let's Move!" initiative, The President’s Challenge Program, The President’s Active Lifestyle Award, Bill and Melinda Gates Foundation, SHAPE America and Spark for The Legend Of LIONMAN One Million Kick Challenge which has helped more than 30 million people around the World "Kick Obesity Out Of America!"

He was honored to be a part of history when he worked on the committee to elect the very first African-American President of the United States, President Barack Obama!

In his karate dojo at BLUE LION Karate Academy, GrandMaster O’Neal told stories of ‘LIONMAN’ based on his real life experiences to captivate young students and impart essential life lessons. After retiring from competition, he authored the 28 graphic novel series The Legend Of LIONMAN And The Seven KURODOS, to get kids excited about Science, Technology, Engineering, Arts and Mathematics (STEAM). The Legend Of LIONMAN And The Seven KURODOS is the first multi-cultural team of superheroes using Martial Arts and STEAM to bring about Universal Peace.

LIONMAN Foundation has donated thousands of copies of The Legend Of LIONMAN And The Seven KURODOS comic books and posters to underprivileged kids to help promote literacy.

LIONMAN Foundation is currently partnered with Arise Academy where GrandMaster O’Neal is transforming more than 500 students to be disciplined and successful. Dr. James Gilmore, Executive Director of The Children’s Cabinet for the State of Louisiana toured Arise Academy to see the success of the LIONMAN Foundation / BLUE LION Martial Arts Discipline and Enrichment Program first hand. Arise Principal Mrs. Krista Brown shared with Dr. Gilmore the suspension rate at Arise had decreased by 75% in the first year and by 90% the second year of GrandMaster O’Neal working with the students there.

As he continued to create innovative ways to serve our youth, he partnered with Lenovo Group, LTD, a $46 billion, multinational computer technology company, and with the U.S.

GrandMaster O’Neal was recognized for his exemplary service to our youth and community and awarded the Asante Awards’ Special Education Cultural Ambassador Honoree in 2016.

At the 40th Annual Young Artist Awards in 2017 where GrandMaster O’Neal was a presenter, he reunited while on stage with his friend Ernie Reyes, Jr. who played Donatello in the first Teenage Mutant Ninja Turtles Movie.

Today GrandMaster O’Neal continues to fulfill his promise to GOD with the creation of each new partnership and program to build up future generations!