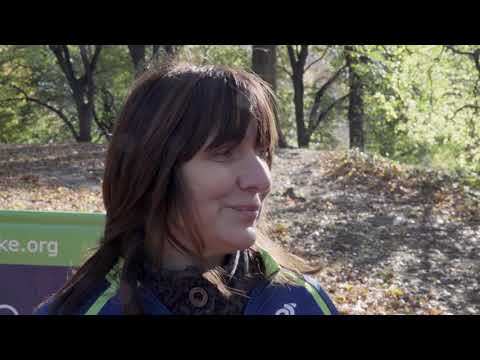 InTandem captain Jonathon Epstein will have the  honor of riding with stoker Eric Santiago in the TD Five Boro Bike Tour!

How long have you been riding with InTandem?

What are your goals this year with InTandem?

My goal is to eventually do a Century. At least once. My goal this year is to get more mileage in, to have more fun with inTandem, get to meet new people that come and join with us. And I’m hoping to do the Grand Fondo again this year.

What is the longest ride that you have ever ridden?

As of right now, the Grand Fondo, when I did 50 miles a few years ago. That was in 2016. It is fun. There is different mileage, different routes that you can choose from. You can choose which one you wanna go for. There are options.

Tell me about your riding experience prior to InTandem.

I haven’t ridden a bike by myself in about 15 years. And coming to InTandem was a blessing because I enjoy bike riding. I loved it when I was younger. But due to my decrease in vision, I wasn’t able to do it alone anymore. When I first did it, I rode with James Sweeney. He was my first captain, and we did a 6 mile, and it felt good. He was describing to me what was going on in the park, what was around, and it was beautiful.

What is your favorite thing about riding with InTandem?

What are the most memorable rides with InTandem?

The Donut Ride. Because you get to eat donuts. You go to the different neighborhoods, and go explore, and have donuts. It is so tiring, because you are up all night, and then the riding. But then you get a donut in your system, you get your energy back, and you go to the next place.

One of my other favorite rides was when we biked from Central Park to Prospect Park. We did a loop or two around Prospect Park, and then we went to Erik Laby’s family restaurant, called Burgerito. Their food was delicious. And it was a fun ride because it was a beautiful day, it was a small group of us, and we got to enjoy good Mexican food. That was one of my favorite rides.

Another one that I remember is the 5 Borough. My first one was in 2016. I was hesitant about it because it was my first tour, it was my first big ride. I was riding with James Sweeney. And the thing I liked about it was that you get to pass by my old neighborhood, I grew up in Green Point, and go over the Pulaski bridge. My mom and my family always used to go on the bridge to cheer either the runners on for the marathon, or the bikers on for the bike tour. And with InTandem, I could finally be on the other side, and have my family there cheering me on. I think that was one the be best moments I ever had with InTandem. Specially during the 5 Borough. Because every time I do that, once we are close by, I’ll text them, and I’m like hey, I’m this far, get ready to go to the bridge. And my family is always there to cheer me on. This was the most favorite.

Tell me about your captain for this year's Five Borough Bike Tour?

Jonathon can be very descriptive with things. He gives you every detail so you can have a picture in your mind, and imagine what is going on. The communication is excellent with Jonathon, because he tells you when he’s gonna go faster, or gonna coast, or when he’s gonna break. He’s very vocal with everything he does.

Instead of the Donut ride, we need a pizza tour, and we could hit all the best pizza joints in each borough. And for Halloween, do a ghost tour.

A close friend who is blind introduced me to InTandem in 2013.  Being  that I work for AHRCNYC serving adults with developmental disabilities,  have my MA in disability studies, love to ride and my father owns a  chain of bicycle stores (Marty’s Reliable Cycle), InTandem is a perfect  fit!  Over the past 6 years, I developed a thorough training for  captains and stokers to ensure that our members ride safely and  efficiently, planned or helped plan every ride InTandem has done, and  helped build an inclusive community.

InTandem means together.   I have met many of my close friends  through InTandem.  The warm, welcoming culture makes me feel safe, in my  element and there is there is nowhere I’d rather be than with my  InTandem family!  Our members hang out together, go on vacations  together, and for many, it’s their primary source of exercise and  meeting people.

Many stokers I have trained have told me that they used to ride  regularly and never thought they’d be able to experience the thrill and  freedom of riding after acquiring a disability.  And for many others  InTandem has given provided their first cycling experience!  Volunteer  captains often tell me that they wouldn’t ride or exercise half as much  if they didn’t have the InTandem community to join.

My favorite thing to do is train parents to ride with their children  with high level needs.  I’ve had individualized sessions with children  with disabilities and their parents to ensure that they have all of the  training and accommodations they need to have a great and safe time  riding together.  In some cases it has taken weeks or months of slow,  gradual progress but now these families ride regularly ride together and  it’s a way for them to share what they love and grow closer.

Please support me to continue to grow the InTandem family!

InTandem is a 501c3 not-for-profit organization whose mission is to  provide tandem cycling programs to people who are blind, have low  vision, or cannot ride independently due to other disabilities.  We  provide the tandem bikes, equipment and training and coordinate all  riding programs – all at no cost to InTandem members.  Our Captains  (that’s who rides in the front seat) are all experienced cyclists from  the community who volunteer their time and energies to ride with our  Stokers (the rider in the back).

InTandem has rides most Saturday mornings from 9:30AM to 12:30PM and  most Thursday nights from 6:30PM to 9:00PM in Central Park.  We also  have InTandem Indoors spin classes every Wednesday night at the Asser  Levy Parks and Recreation Center.  InTandem organizes various other  social and recreational events and longer bicycle tours every Sunday.   Anyone is welcome to join InTandem and it is possible to organize  additional rides for those who cannot make regular sessions.

For any questions about InTandem, please reach out to Matthew Nidek,  Executive Director, at mnidek@intandembike.org or Jonathon Epstein,  Director of Operations, at jepstein@intandembike.org.