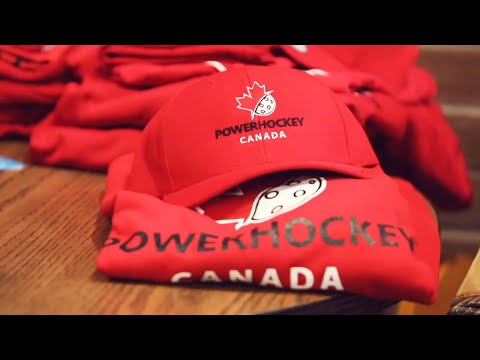 The Driven To Play Fund fosters and fuels the ongoing growth and development of PowerHockey Canada initiatives. It draws on Canadians’ overwhelming passion for hockey and their unwavering commitment to their communities in order to build a bright, strong, resilient, and sustainable future for powerhockey in Canada. Providing opportunities for individuals with disabilities to excel and achieve personal successes is the catalyst to the creation of the Driven To Play Fund. Fostering a community where everyone has a role and a purpose is the essence of PowerHockey Canada. As one, together we can achieve a greater understanding of each other and become a stronger country because of it.

Welcoming Diversity and Promoting Inclusion
In arenas and gyms, schoolyards and outdoor rinks, and even in the streets, nationwide you’ll find hockey being played. The faces of hockey are a mosaic representing the vast diversity of Canada. There’s a place for everyone in hockey, regardless of age, gender, cultural heritage, sexual orientation, or ability. It’s this intrinsic universality that draws people in and gives everyone a drive to play.

A Part of Who We Are
Hockey is, without a doubt, Canada’s game. It’s a part of the cultural fabric that makes our country what it is. It’s woven into the traditions of the past, and the goals and aspirations of the future. It’s part of what makes our nation united from coast-to-coast, uniquely binding and bringing us together. The sport has become a part of who we are as Canadians and a metaphor for what we believe in: teamwork, solidarity, and fair play. From the Pacific to the Atlantic, and every city and town in between, hockey is Canada and Canada is hockey.

A Foundation For The Future
The way to building future powerhockey success is through supporting one another, reaching new heights together. As Canadians, we are known for lifting each other up. PowerHockey Canada pledges to use 100% of the funds raised through the Driven To Play Fund to support growth and development in three main ways:

1.  Growth Grants – Starting something new is always a challenge, but with PowerHockey Canada assisting to support the initiative, it makes it a little bit easier. Members will be able to submit grant applications to support their initiative.

2.  Sustainable Future – PowerHockey Canada believes that our Members can always use a helping hand to ensure their powerhockey program not only continues, but flourishes. Annual transfer benefits will be made to Members.

3.  Greater Awareness – Putting the parasport of powerhockey on the radar across Canada is vital to ensuring the future is bright for PowerHockey Canada and all of its Members. PowerHockey Canada will invest in tools, services, and initiatives that will lead to generating exposure and awareness.

How Can You Support PowerHockey Canada Across The Country?
Just like in the sport itself, in order to reach our goal of supporting our Member organizations across Canada, we all have to be part of the team. Everyone plays a role and it adds to the overall success. Whether it’s simply joining the team and learning the basics or making key plays, together we can win not only the game, but the championship! Join the team and we can all win!