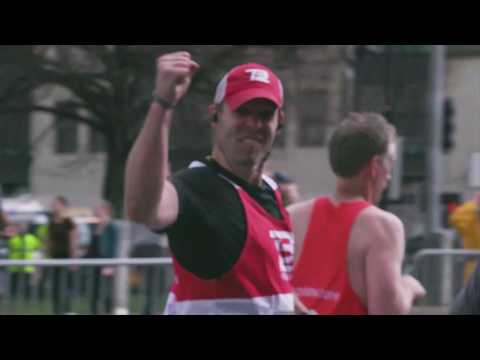 Hey, My name is David Hagen.  I'm 46, a husband, and father of two awesome kids. ( Abby 19 and Ethan 15)  My wife, Gloria, began running marathons in 2016 with the NYC Marathon followed by the Boston Marathon in 2017.  At that time, I had no interest in running or getting healthy and fit.  It took almost two years before I took an interest in living a healthier physical, mental, and spiritual life.  I credit my development in part to the TB12 Method.

I was gifted Tom Brady's book and I began to read it as I was curious of the dietary changes and the workouts.  What I came to realize and achieve was a change in my how I do nearly everything in my life.

In the spring of 2018, my running story started with just trying to get in shape as I began running 5Ks and I enjoyed them.  Over the course of the next summer, I ran several races culminating in my running the Staten Island Half.  I ran very well, but the pain I experienced after the race made me never want to do that again.  Two weeks later, while watching my wife run her 2nd NYC Marathon, I was overcome by the feeling that I wanted to experience the energy that comes with running 26.2 miles.  Now I faced a challenge of getting my body to do something I felt it wasn't capable of doing.

Soon there after I was chosen through a lottery to run the 2019 Chicago Marathon.  Using TB12 Methods of pliability I trained my body to run the distance and finished the race in 3 hours and 53 minutes.  I was hooked.  With my daughter now at Boston Univeristy, I wanted to run the Boston Marathon next.  I knew this wasn't going to be possible for a couple of years as I would either need to get much faster or get older in order to qualify.

Just recently, I became aware of the opportunity to run with the TB12 team and I am so grateful to have been added to the roster.  I know I will be setting a Boston PR in April, hopefully it will be an overall PR.  I'm getting a little bit of a late start on training, but with the help of the TB 12 Methods I'm confident I will be ready to roll.

Please take a look at the pictures and videos I will be posting over the course of the next two and half months.  I'm looking to raise as much money as possible for the TB12 foundation.  I owe much of my spiritual, mental, and physical growth to the concepts I have incorporated into my life.  The TB12 foundation looks to do the same for those that don't have the resources themselves to do the same.  I am so grateful for the opportunity to run the Boston Marathon as part of the TB12 team.  I hope you can help me raise the funds to make that happen.

For more on the TB12 Foundation; read on and thanks in advance for your support.

Helping Athletes Maximize Their Health and Potential – The TB12 Foundation was founded in 2015 by six-time Super Bowl champion New England Patriots quarterback Tom Brady. Its mission is to empower athletes everywhere to do what he’s done in his own storied career – keep going despite the odds. We aim to help athletes improve longevity, prevent injury and stay on the field, court, track or course doing what they love better — and for longer. The TB12 Foundation has been able to help at-risk athletes access the practitioners and programming they need — including pliability treatments, functional strength & conditioning, and advice related to nutrition, hydration, and cognitive health — to overcome injuries or obstacles that would otherwise keep them sidelined.