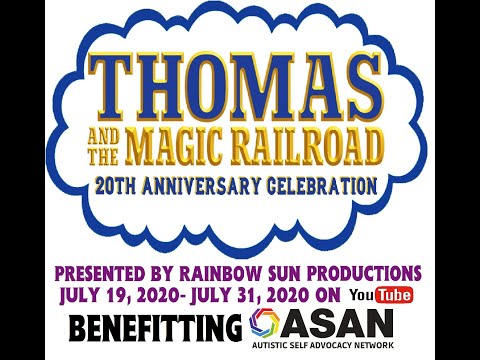 In 2000, Thomas the Tank Engine appeared in his first (and only) theatrically released film. Seven years later, a very different version of the script was found online, one with deleted characters, altered scenes, and a different plot and ending. It came to light that after a poor test audience, producers required drastic rewrites and edits weeks before the film's world premiere. While the theatrically released version of the film celebrates its 20th anniversary this month, the original “lost edition” cut of the film has yet to be released, but there is a light at the end of the tunnel.

However, Rainbow Sun Productions has crafted a unique experience for audiences to enjoy. The team has combined the May 1999 Draft, the August 1999 filmed script, and the released 2000 film with original material to provide fans and audiences with a reimagined extended edition for the 20th anniversary. This celebration will feature an incredible lineup of film, television, Broadway, and West End stars bringing these beloved characters to life in a digital script reading, in addition to a selection of artists performing songs intercut within the reading. This presentation will honor an important piece of Thomas and Friends history, while celebrating the future of the franchise during this special 75th Anniversary.

100% of the donations collected will go directly to the Autistic Self Advocacy Network (ASAN), a 501(c)(3) nonprofit organization run by and for autistic people. The Autistic Self Advocacy Network seeks to advance the principles of the disability rights movement with regard to autism. ASAN believes that the goal of autism advocacy should be a world in which autistic people enjoy equal access, rights, and opportunities. ASAN was created to serve as a national grassroots disability rights organization for the autistic community, advocating for systems change and ensuring that the voices of autistic people are heard in policy debates and the halls of power. The staff work to advance civil rights, support self-advocacy in all its forms, and improve public perceptions of autism. ASAN’s members and supporters include autistic adults and youth, cross-disability advocates, and non-autistic family members, professionals, educators, and friends. Activities include public policy advocacy, the development of autistic cultural activities, and leadership trainings for autistic self-advocates. The team provides information about autism, disability rights, and systems change to the public through a number of different educational, cultural, and advocacy related projects. https://autisticadvocacy.org/

Rainbow Sun Productions Co-Creator, Eric Scherer, has big ambitions with this presentation. “Originally, we wanted to produce a live concert-style staged reading for the presentation, but due to theaters worldwide being shut down, a digital presentation was the best option. This also allowed everyone to work safely from the convenience of their homes.” Scherer is very familiar with the Thomas brand. Rainbow Sun Productions has produced web content focussed on the series for several years. In 2016, Actors Reaching Out (a nonprofit theatrical organization promoting literacy and community outreach started by Scherer) produced an original 75 minute live educational program for local libraries which included a selection of Thomas songs and stories. “Many people can’t imagine these characters’ stories can be told in a live theatrical environment. With the library programs, we wanted to prove it could be done while still keeping character integrity in mind. Thomas and the Magic Railroad: 20th Anniversary Celebration is just the next step in the process.”

Thomas and the Magic Railroad: 20th Anniversary Celebration premieres on the Rainbow Sun Productions’ YouTube Channel starting at 3pm EST/ Noon PST on Sunday, July 19th, 2020. The digital presentation will remain available for viewing for a limited time through July 31, 2020. You can subscribe to the channel now, and set a reminder for the event on July 19th. https://www.youtube.com/channel/UCFjkKrcprnw3z0NtCirkkmA

While there is no minimum donation required for viewing, Rainbow Sun Productions asks for any amount you can donate to assist those in need.

Rainbow Sun Productions is an entertainment company where all stories shine bright. The company develops and produces a variety of web content, series, films, and live theatrical events. Web content includes Converse-ations, Twinventures, Wanna Play?. Confusion & Delay, and Face Your Fears. Theatrical events include Killer Kabaret, An Avengers Line, and The Songs of Howard Ashman. Digital Presentations include The Howard Ashman Celebration, and Thomas and the Magic Railroad: 20th Anniversary Celebration. Further shows, concerts, and events are currently in development for your future enjoyment. For booking information, please contact RainbowSunProductions@gmail.com.