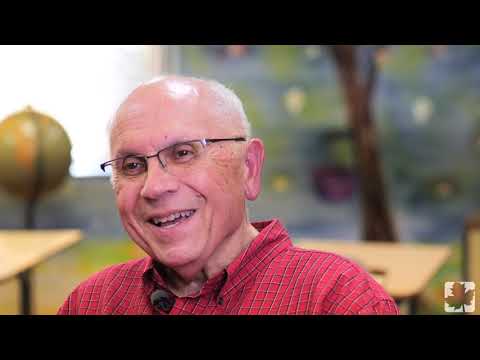 In honor of the Swansons’ years of dedicated service, we are holding a special fundraiser rather than a retirement party. We invite alumni and friends who have been touched by the Swansons’ lifetime ministry to consider donating $57, one dollar for each year that Swanee taught here. Our goal is to raise at least $57,000 towards the Worthy Student Fund. Any donation is appreciated whether large or small. Please join us in honoring this extraordinary couple!

John F. Kennedy still lived in the White House when a youthful Evan Swanson taught his first history and biology classes at Maplewood Academy in 1963. The Berlin Wall had been erected just two years earlier, the moon landing still loomed in the future, and few Americans could conceive of a world without the Soviet Union. During that first year at MWA, Mr. Swanson—soon nicknamed Swanee—served alongside faculty members old enough to remember World War I and the 1918 Flu Pandemic. His first students copied their class notes from a dusty chalkboard and learned the details of current events belatedly from printed newspapers or in class from Swanee himself.

Today almost six decades have come and gone, along with the Soviet Union and most of the British Empire, 11 U.S. presidents, nine Minnesota Vikings coaches (no Super Bowl victories yet!), and three generations of Maplewood students who counted Swanee as a lifelong friend and mentor. This year, at age 80, he finally retired his dry erase markers. His 57 years of service on one campus must surely set some kind of record for Adventist academy teachers in North America.

Swanee’s most recent students were born well after 9/11 and have never lived without digital devices. In 2020 we all carry unlimited news and facts in our pockets, yet more than ever we need wise teachers to help sort through the noise. In a world of harsh rhetoric and black-and-white reasoning, Swanee taught us to sift information, consider the source, and appreciate nuance. With an amused chuckle and that quizzical eyebrow, he questioned our teenage assumptions until we learned to do our own thinking.

He not only taught history but lived it beside us, talking us through the Civil Rights Movement, Vietnam, the end of the Cold War, and beginning of the new millennium. He connected ancient quarrels to current world conflicts and set it all in the context of eternity.

Still, Swanee’s most enduring legacy extends far beyond the classroom. He and his wife Evie (Johnson) Swanson made the campus a home, whether we were farm kids from northern Minnesota or international students from Ethiopia or Mexico. Think of your own favorite memories from MWA—if you’re under the age of 75, the Swansons were surely a huge part of your experience. How many miles did they put on that station wagon taking us to Kmart for supplies? How many class officer meetings did Swanee coach us through, and how many times did he help decorate the same cafeteria for banquets? How many homes across Minnesota did he visit while recruiting students because he believed in this school and its mission? And how many hours did he pace the campus perimeter while “on duty” (surely his least favorite task, but one he carried out with faithfulness and grace because our families counted on him to help keep us safe and well-behaved)?

And next time you’re on campus, take a look at all the trees. He planted a good number of them himself and nurtured them into maturity, just as he planted seeds of curiosity and critical thinking in several thousand youthful minds over the decades. Whether growing trees or strong Christians, Swanee has always fixed his eye on the long view.

His former students are fiercely loyal and still seek him out when they visit campus for Alumni Weekend or camp meeting. Typically they find him in a lawn chair in his driveway on the north side of campus, always with a matter-of-fact smile as if he expected the unannounced company. Notably, some of Swanee’s most devoted fans are former students who confess to having been “troublemakers” or “lazy students.” Mrs. Swanson explains, “He treated every student with respect. He believed in second chances.” Of course, he also believed that a little teasing was good for the character, and few students escaped his gentle mockery.

Unlike some teachers who consider summer vacation the best part of teaching, Swanee loved a busy campus. Mrs. Swanson says, “For him, the highlight of the year was when students returned to campus every fall. It wasn’t the same without the kids. He really gets energized by teenagers and gets such a kick out of their fun ways.”

Mrs. Swanson also taught classes (family and consumer science) after their children were grown and marvels at how God led them to serve a lifetime at the same school where she was once a student. She says, “Truly, being on this campus, working with the wonderful staff families over the years—it’s such a family feeling. The blessing has been ours.”

Swanee has always said, “If you love your job, you never work a day in your life.” He certainly did love his job, along with his students and the unique calling of Adventist education. He admits to shedding some tears over the decision to finally retire. The Swansons say, “As far as we’re concerned, Christian education is about the best investment we know of. It pays dividends for eternity.”