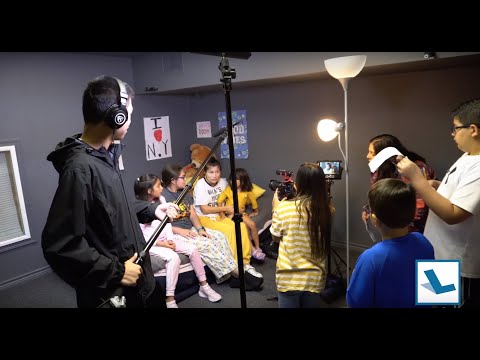 LearnThink Media provides youth with an opportunity to enjoy summer fun while learning 21st Century Skills.  Our 2020 summer film camp program runs for six weeks beginning June 8th through July 24th (July 4th week off). Operation hours are 9:00 a.m. to 5:00 p.m. Monday through Friday.  Chef Gracie Carrillo of Fina's Cooking & Catering will provde a three-course meal for lunch with a drink plus water and snacks throughout the day.  The program is open to artists ages 8 to 16.

"Your program certain dispels the notion that there is not enough educational and entertainment options for our kids." - LTM Parent.

”Film is what I love, if I could come to every one of these camps, I would so I can keep on learning.” - LTM Camp Kid.

LearnThink Media was created to provide innovative programs in Laredo, Texas and surrounding cities.  We offer 21st Century learning so youth  can develop the skills they need to live a better quality of life no matter what career path they choose.

To elevate, inspire, and educate artists to be active in shaping the way our community sees independent film, media arts, and technology as valuable careers; and to celebrate their work through screenings, festivals, exhibits, and other events to create a deeper appreciation of the various art forms in our community.

"LearnThink Media needs support so kids can [in Laredo] can have better experiences." - LTM Camp Kid.

What is LearnThink Media's Community Impact?

Thirteen films were screened at LearnThink Media's 2019 Inaugural Youth Vision Film Festival hosted at Alamo Drafthouse Laredo with a 92% attendance rate of the 341 seats reserved. Twenty (20) known attendees joined us from cities in Austin, Dallas, Houston, and San Antonio. The event was a celebration of our young filmmakers who joined us during our four (4) one-week summer film camps between June and July.  Students learned the principles of story development, screenwriting, and film production receiving hands-on experience in our Short Film and Water Texas Films camps. Our Stop Motion Animation camp used principles of photography and design to incorporate mixed media into the students’ work.

We achieved our goal of six (6) short films and exceeded our goal for stop motion animation by two (2 )for a total of eight (8) submissions. Additionally, films created in our Water Texas Films camp were submitted to “Water, Texas Films” which dedicates itself to raise awareness on the importance of water in Texas. With these submissions, students have an opportunity to win cash prizes and a special category award for teams eighteen years of age and under with Director Richard Linklater as judge.

We received fifty (50) enrollments with a total of forty-one (41) student participants for our 2019 inaugural year. Thanks to our partnership with Laredo Housing Authority, 20% of students from affordable public housing were able to participate at no cost. LearnThink Media resembled an inclusive classroom in which 10% of students were reported to have learning disabilities such as Autism and ADHD.

Registrations consisted of students from U.I.S.D. and L.I.S.D. school  districts including a private school - Saint Augustine, and Harmony School of Excellence - a charter school in Laredo, Texas. One student joined us from Taiwan, China, who traveled from Houston, Texas while visiting family in the U.S. thanks to the family of LearnThink Media's founder who supported his travel and his lodging.

We have increased our number of camps for 2020.

All seven theaters at Alamo Drafthouse Cinema - Laredo have been reserved for our 2nd Annual Youth Vision Film Festival scheduled on November 7, 2020 from 9:00 a.m. to 1:00 p.m. In addition to the eight (8) short films and five (5) YouTube videos we will screen from our young filmmakers, we will have a photo exhibition of forty-five (45) prints on display in the lobby until 3:00 p.m.  We estimate 700 - 750 attendees made up of family, friends, sponsors, and supporters.

Why is this organization important?

Cities like Austin, Dallas, Houston, and San Antonio are booming with programs that offer equitable access to creative education. In south Texas, LearnThink Media is one of the very few non-profit organizations that seek to provide a safe, creative and influential environment for all artists to explore creative fields.

With your support, LearnThink Media can offer youth programs that provide insight to career opportunities previously unaccessible in Laredo, Texas.  Ultimately, we'd like to establish partnerships with organizations who can provide our camps at no cost for 60% of those in poverty, homeless, or at-risk.  Additionally, we would like to engage 30% of students with disabilities.

What is the need LearnThink Media is addressing in our community?

Laredo, Texas is located on the border to Mexico with a population of 261, 721. Since Laredo was founded in 1755, citizens from both sides of the border have crossed over for personal and economic reasons (Texas Historical Association, 2010). According the U.S. Census Bureau, 97% of citizens in Laredo are of Hispanic origin. For 90% of the population living in Laredo, the primary language spoken at home for individuals five years or older is Spanish.

All artists have a right to access opportunities that develop their skills in creative fields, elevating and empowering them to a higher level of success for happier, more abundant life.

The Port of Laredo is the number one port along the US-Mexico border, above Los Angeles and New York, with a trade value of $234.66 billion (Laredo Economic Development Corporation, 2019).  Even so, a vast number of its residents struggle with cost of living due to minimal job wages and low job diversity. The U.S. Bureau of Labor Statistics states that the highest paying jobs in Laredo are physicians with  the lowest paid jobs held by those in restaurant and hotel hospitality positions such as hosts and hostesses, dishwashers, and fast food servers.  (2018).

In July of 2017, the City of Laredo joined the Bloomberg Harvard City Leadership Initiative to better define poverty in Laredo. The data shows that 30% of our population lives at or below the average median income which is approximately $16,000 less than the median Texas household income and approximately $15,000 less across the U.S. (Data  USA, Laredo Profile 2018).

According to Laredo's Opportunity Map developed by Santiago Mota -- Harvard Fellow, as part of the Harvard Bloomberg Partnership, there is a large disparity of wages when related to gender which shows women are underpaid in most fields. When it comes to poverty, 27% of households are led by single females and 23% are families with children living in poverty.

On September 18, 2017, the City of Laredo adopted Viva Laredo— a comprehensive master plan for Laredo, after 26 years of failing to execute the former comprehensive plan adopted in 1991. Our community remained stagnant until a group of citizens and key city officials moved to implement a new comprehensive plan for our city. On June 14, 2016, and August 26, 2016, citizens were invited to attend Town Hall meetings to engage them in participating with the creation of the plan.

During both events, comment cards were provided to participants. In both Town Hall meetings Education was the number one priority topic. Even further, one of the main concerns was to provide “local access to excellent education options that lead to diverse job opportunities” (Viva Laredo, 2016).

LearnThink Media's overreaching goal is to employ talent that comes through our camps as students, facilitators, or volunteers so we can expand our youth programs to a larger audience and to extend our programs for artists ages 16 and up.

What will the funds be used for?

Your support covers LearnThink Media's operational expenses which include salaries, marketing expenses and other administrative costs.

LearnThink Media provides advertising opportunties at our 2nd Annual Youth Vision Film Festival, and other great benefits, to those who donate towards our campaign.

We will do our best to honor sponsorships for those who live outside of Laredo, Texas.

As a start up-non profit organization, we thank you for your unyielding support.  If you'd like more information about LearnThink Media, please contact Roxanne Peña, Founder,  at (956) 420-4700 or email: roxanne@learnthinkmedia.org.