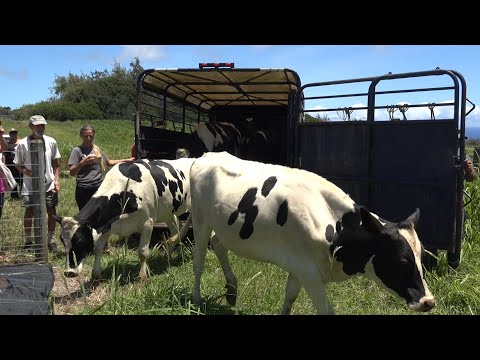 This August will mark the third anniversary of Gentle World's acquisition of 34 magnificent acres of agricultural land in Hawaii. This breakthrough was made possible in 2017, thanks to a philanthropic loan in recognition of all Gentle World has done, over the past 50 years, to contribute to the slow—but now snowballing—rise of veganism around the world.

In observance of what would have been the 79th birthday of our late co-founder Sun, we are elated to be able to pledge to her the fulfillment of one of her primary dreams for VeganLand, as we dedicate a portion of our 34 acres toward a partnership with Magical Creatures of Hamakua as extra grazing land for their rescues.

Magical Creatures is a labor of love born from the beautiful mind and heart of Helena Lundblad. When Helena decided to put into action her long-held dream of founding a sanctuary, she intended to expand at her own pace, and welcome new residents as her time and resources allowed. But unexpected events in recent years have pushed Magical Creatures to grow at a rate that has challenged that intention.

In 2018, Alessandra Rupar-Weber, another formidable Big Island vegan, found herself called to rescue some of humanity’s forgotten: those facing either relocation or slaughter after a Big Island dairy closed in response to the complaints of locals about the pollution it was spilling into nearby waterways.

With the help of a tiny crew and nothing but the financial support she generated by working around the clock, Alessandra and the Hawaii Lava Flow Animal Rescue Network (HLFARN) saved the lives of 401 cows and calves who were allowed to stay together in homes she tirelessly worked to find.

As a result of the efforts of HLFARN and more than 60 families who opened their hearts and homes, these dairy refugees will now be allowed to live their lives in peace, without being used as anything other than a reminder of how much good we can do if we are but willing to see others as they really are, and treat them accordingly.

When we visited Magical Creatures in 2018, Helena explained how the lava rescue had challenged her resolve to allow the sanctuary to grow at a pace with which she felt comfortable. But a few months later, when Alessandra rescued from the closing dairy five more individuals than she had homes for, Helena welcomed them into hers.

In addition to the cows rescued by HLFARN, Helena’s land now supports 23 goats, 16 pigs, seven chickens, six sheep, three cats and one dog. Two of her 63 nonhuman residents are in wheelchairs. One is blind, one visually impaired, and one wears prosthetic legs.

During Sun’s final year, when joy was hard to be found, one of the few things that caused her to light up was when she received word of the successes Alessandra was achieving with her dairy rescue. She took joy in every photo we saw of cows being welcomed into loving homes with the calves who would have been stolen from them by their sides.

And so, we are launching our fundraiser as a birthday gift to Sun, and the funds raised will go toward the expenses associated with providing what is needed for VeganLand's first residents. A breakdown of the specific costs can be found below.

As always, we are beyond grateful for the support provided by our friends and readers. We look forward to sharing with you photos and updates, as we welcome these beautiful beings onto a piece of land dedicated to the vision of a world where every one of their kind will be treated with the dignity and respect they so clearly deserve.

Breakdown of Expenses (in order of priority):

The cost of removing guava, to ultimately provide around 1.5 additional acres of grazing land = $2500