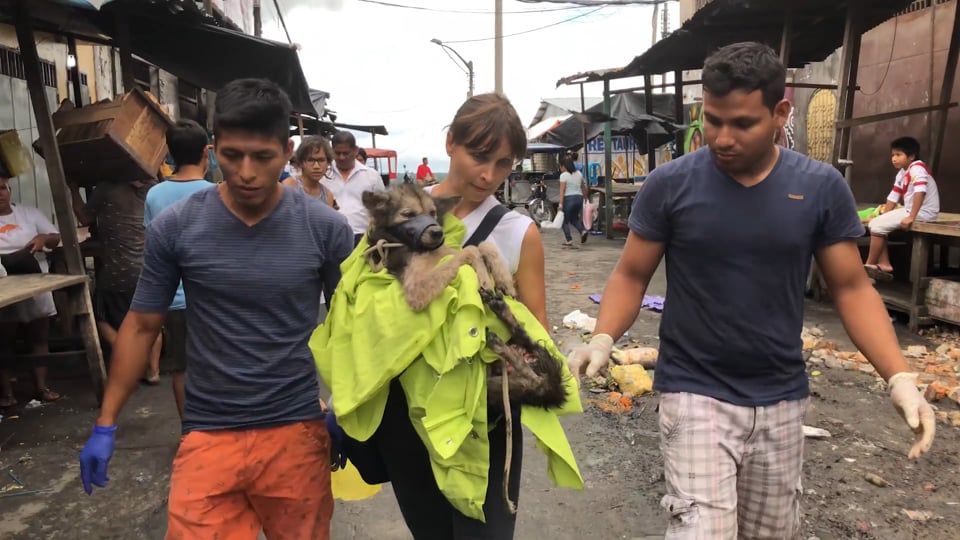 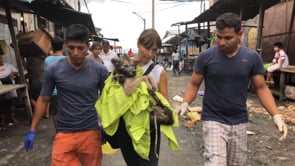 Welcome to the GoFundMe Page for the documentary film: STREET DOG

THE STORY: In 2015, I went to Peru to find my purpose, but my purpose found me when I met a street dog on his last legs. He only had a couple of days to live in the condition I found him in and I made a promise to him and to all the other street dogs that I will bring them help and Project Street Dog was born. After his recovery, Charlie came to live with me in Los Angeles and became a therapy dog visiting hospitals and institutions to bring joy to the elderly. As far as the other street dogs, I kept my promise. I understood early on that in order for the life of street dogs to change and to eventually get to the point where there are no more animals living in deplorable conditions on the streets, several things need to happen. We need to educate communities on the importance of sterilization and responsible pet guardianship, we need to bring free spay/neuter campaigns and mobile clinics, we need to popularize a collar and leash culture and to educate children about compassion. Children are like sponges, they are the greatest of imitators. If we model kind and compassionate behavior to them, that’s exactly how they will act as adults. On the contrary, if our behavior is imbued with anger and violence, that’s what they will mirror in their adult life.   Since 2015, I have been back to Peru numerous times with our now non-profit organization, Project Street Dog. I organize and run mobile clinics with a handful of local veterinarians and volunteers, bringing free veterinary services and free spay/neuter campaigns to marginalized neighborhoods. We bring educational campaigns to the children in these communities where we teach kindness, compassion, reverence for all life and responsible pet ownership. I raise the funds through friends, social media and word of mouth and all the funds go to purchase medicine for the campaigns and for the treatment of rescued animals. We have documented our efforts over the course of 5 years with photos and over 400 hours of video footage.

ABOUT THE DIRECTOR/WRITER
Ursula Vari is a Nobel Peace Prize nominated author, photographer, who has devoted her life to elevating consciousness. Through her philanthropic work with street dogs and communities in the Peruvian Amazon, she has been a force that inspired people to reevaluate their relationship with nature and animals. She resides in Los Angeles with several rescued animals. Her novel, Four Seconds was published in 2016 and has received rave reviews. She has been featured in The Cure, a documentary released in 2017.

OUR GOAL: WHY IS IT IMPORTANT TO MAKE THIS DOCUMENTARY

We love dogs, at least most of us do. There are over 89 million pet dogs in the US alone. At the same time - according to the World Health Organization- there are around 200 million street dogs around the world, roaming the streets in deplorable conditions. Peru is one of those places. In itself a wonderful country with beautiful people, it is a mythical tourist destination with beautiful sights- but beyond the beauty there’s also the underbelly what guidebooks won’t show you, the life of the street dog. Although there’s a law that protects animals in Peru (LEY 30407), animal abuse, cruelty and abandonment is at an incomprehensible level and offenders are rarely prosecuted. My goal was to create a volunteer based non-profit group to inspire and empower the community to help animals, to reconnect with the compassion in their hearts and to work together with the municipality and offer a solution: a 4-step model that turned the Netherlands into the first country with no street dogs. I also understood early on that by bringing Charlie’s story to a bigger platform, along with the story of all the animals we rescued and the magnitude of our efforts could help inspire not only the local community but the citizens of the world, thus mending the broken bond. The goal of this film is to educate and inspire much-needed change in the way humans relate to animals, specifically street dogs. While the film has an aspiration for global impact, at its heart is the hope for a shift in the way animals are being treated in Peru and more specifically in Iquitos. Charlie’s story is the story of a true underdog who beat all odds, a street dog who found his purpose in life. He represented forgiveness and he awakened compassion in many. He was my greatest of teachers and he inspired me to continue the work my father couldn’t finish as veterinarian due to his untimely transition.

WHAT DO WE NEED THE MONEY FOR: I shot over 400 hours of footage of the work we do, of the incredible transformation the animals we rescue go through, the joys, the heartbreaks and most of all the inspiration that Charlie’s story has become to me and to thousands of others. We need the world to see the life of street dogs, the forgotten ones and the hope that we, humans can bring to them. We need to remind mankind of the promise we made to them: to be their best friends and caretakers. We need to get back to our hearts and connect with our compassion, as the way we treat animals is also a reflection on the way we treat our fellow humans.

After much consultation from professional filmmakers, we have found that we need to raise at least $25,000 in order to create and distribute a documentary that has high level production value and quality. We believe that the only way this film will reach the masses we intend for it to, is if we produce it at the highest level realistically possible. Upon completion, we intend to show the full-length documentary at film festivals.

WHAT YOUR DONATION WILL GO TOWARD
Production needs:

*Present the work we do with Project Street Dog and investigate the root cause of homelessness among animals and to offer a workable, humane solution

*Through Charlie’s story start the conversation about street animals, the “forgotten ones” and to eliminate the stigma surrounding them

*Educate on compassion and empower audiences

*Whether you donate five dollars or five thousand dollars, we will use the money to create a film that WILL save thousands of more lives.

Your support means EVERYTHING to us.

Other Ways You Can Help
There are many ways you can help make this project possible without donating a dollar.

-SPREAD THE WORD ABOUT PROJECT STREET DOG! After all, a primary objective of our project is to raise awareness on the plight of street animals.

Funds collected beyond the amount needed to complete the documentary will be used toward the treatment of the animals in the care of Project Street Dog.