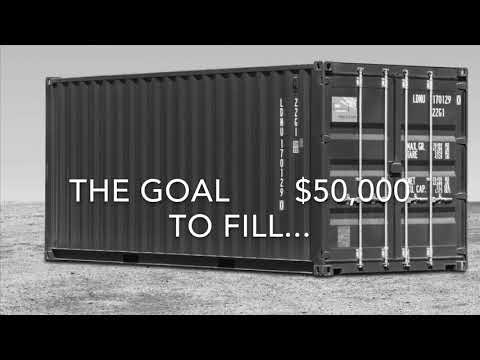 The Goal is to raise $50,000 to fill a sea container with food to supplement 30 Arviat families ' annual nutritional need.

The Society of Saint Vincent de Paul Canada (SSVP) has adopted and embraced various communities across Northern Canada since 2008 under the North of 60 initiative. (see www.ssvp.ca/north-60)

This is SSVP Peterborough’s first year in supporting the community of Arviat, Nunavut. It was our intent to work with schools, service and church groups, and businesses to gather / purchase the Arviat Food List (see below).

Due to the COVID-19 pandemic and the requirement to social distance, the food drive has turned into a fundraiser.

Food and other supplies will be purchased in Peterborough to fill the sea container. It will be trucked to Montreal in late August or early September. After the container is loaded on a ship, it'll depart on the once a year summer crossing bound for Nunavut. It will directly address food insecurity within the community

Arviat (ᐊᕐᕕᐊᑦ) is the southernmost mainland community in the Kivalliq Region, on the west coast of Hudson Bay.

• The Hudson Bay Company established a trading post at Arviat in the 1921. A Roman Catholic mission was setup in 1924. In 1926 an Anglican church followed. A federal school was constructed in 1959.

• Inhabited originally by the Paallirmiut, a coastal/inland Inuit band. In 1957, the last remaining Ihalmiut, a Caribou Inuit band, were relocated to Arviat.

• Arviat is accessible by sea (summer and fall), and air only. No roads lead to Nunavut.

• Approximately 42% of the population are children under the age of 18.

• Majority of professional higher wage jobs are held by southerners.

• Caribou hunting and fishing remain the main source of sustenance.

• Arts and crafts industry began in the early 60’s and remains a vital portion of the community.

“Canadians living in northern and remote communities face highly elevated and in some cases extreme, levels of food insecurity. 46.8% of households in Nunavut were food insecure in 2014” Food Banks Canada

True to the spirit of the society’s founder, Frédéric Ozanam, North of 60 communities are our farthest home visits. Please help us let these Canadians know that they are not a forgotten people.

NOTE1: Please be aware that GoFundMe supports charities by providing a free fundraising platform. In return it suggests a "Tip" that is added to your donation. Their default is 10%, however this amount can be changed by selecting the down-arrow to the right of “Thank you for including a tip of:”  The Custom option can be selected to  input the amount of your choosing.

NOTE2: an Income Tax Receipt can be found as a PDF attachment at the bottom of the "Thanks So Much for Donating" email

Thank you for your support


Posted by THE SOCIETY OF ST. VINCENT DE PAUL (PETERBOROUGH)