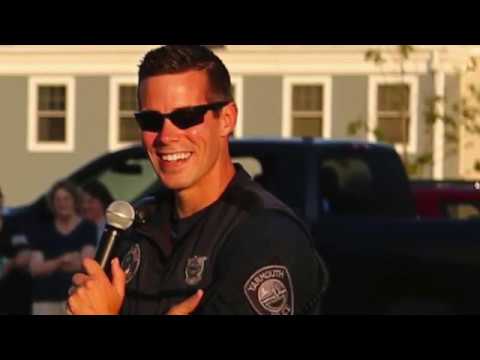 Patriots Day Weekend, 2020. This will be my first Tough Ruck event, which I am extremely excited about as I am looking forward to bringing awareness and support for a whole host of issues at the event and hopping back into a task which I absolutely used to love while on active duty. And though there are many causes I could list to support in my adventure, this is one which I truly believe in. I am humbly asking for your support in reaching my goal of raising $1500 for the Sean M. Gannon Memorial Fund and supporting me as I will embark on a 26.2 mile ruck march in the heavyweight division.

Yarmouth Police K9 Officer, Sean Gannon was killed in the line of duty on April 12, 2018 while serving a warrant. Officer Gannon’s K9 partner Nero was also shot during the incident and survived. Nero was left without his handler, his friend, his partner and his family.

I didn’t know Sean personally but I have talked to several who had, they all had the same inspirational information about Officer Gannon that everyone should live up to, Sean had a love for his community, public service, and a love for kids. Sean especially volunteered his time with Big Brothers and Big Sisters mentoring and providing guidance to youths in the community; at one point Sean even traveled to South America to work as a mentor and a teacher. He believed in his community and gave back. Guidance and mentorship of youth especially in these times is such an important cause on its own but the dedication to leadership, mentorship and guidance Sean gave to so many through all of his work changed lives for so many people and those I’ve had conversations with about him. After Sean’s passing, a Fund was created, the Sean M. Gannon Memorial Fund. Per the organization website gannonfund.org, it is stated,

This fund is a tribute to his strong values, work ethic, and dedication to our community.

100% of donations will support local programs and organizations. The Fund is a component fund of The Cape Cod Foundation, a 501(c)(3) public charity. All donations are tax deductible to the full extent allowed by law.”

With donations/grants going to Big Brothers Big Sisters Cape Cod & The Islands, Boys and Girls Clubs of New Bedford, local YMCA as well as educational programs and educational assistance, this is one thing I feel we can all contribute to for the greater good for those who are our future. For those that seek to be the type of person Officer Gannon was on this earth, a public servant, a man who cared, a Big Brother. Yarmouth PD provided a tribute one year following Sean’s death. It was beyond moving. More importantly was the message, something we could all learn from; Yarmouth PD simply stated, “Just be like Sean and the world will be a better place.”

A true testament to Officer Sean Gannon’s character and life. He truly wanted to make this world a better place. I ruck for Officer Gannon, for the youth of the community which he served and mentored, for the community itself, for his legacy, but most importantly, because in doing so, WE can do something to make this world a little better for someone else. To do it like Sean did.

*Rucking = RUCK-ING [VERB] // Walking with weighted  backpack (aka Ruck, or Ruck Sack). For those who are Rucking it implies purpose through strength, endurance, and   true character. In this case Rucks will weigh at least 15lbs+ for light divisions, and 35lbs+ for heavy divisions.

*** In addition, If anyone reading this who may have lost a Friend or Loved One in service to our Nation in any capacity and you want to nominate their name to be carried on a streamer through the event in their memory. I  would be honored to have their names carried on my Ruck.

Submissions  can  be  made  via  the  Tough  Ruck Fallen Hero Name Registration when it  opens or,

can be sent via FB  message to Bristol Crew Investigates on Facebook, ATTN: Twitch

NOTE: NOTE: All donations through Crowdrise go directly to The Cape Cod Foundation- Sean M. Gannon Memorial Fund and with $200 raised already, all of that has gone directly to the foundation as stated by Officer Gannon's widow. Let's do something good for our community here! Let's do something for others.  Thank you in advance for all your support and assistance.