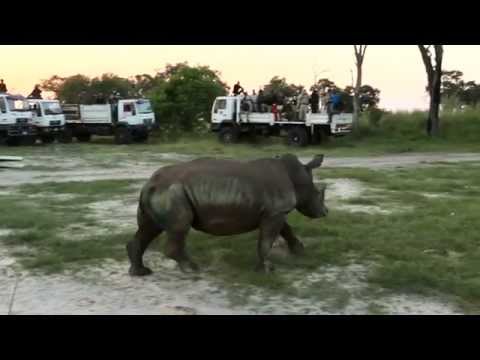 Raised by 19 people in 3 years

The joy & happiness in our kids voices are the only reminder we will ever need to know that a world without “Chubby Unicorns” (Rhinos) and many other endangered species for that matter, is a world we simply cannot imagine and nor can we stand by and do nothing!

As a family we have been very fortunate to have been able to spend so much time in Africa. To see the joy and fascination in our children’s eyes upon seeing these majestic animals in their natural habitat is priceless; it is a memory we will never forget. To imagine that the possibility even exists that Rhinos could become extinct due to human hands is just unimaginable and maddening.

Rhino poaching is at an all-time high in Africa and is increasing at an alarming rate. The illegal trade in rhino horn has seen the number of these magnificent creatures poached throughout Africa rise significantly in recent years. Since 2008, 6,102 rhinos have been poached in South Africa. With a rhino killed every eight hours, more of these African icons are now being lost to poachers every year than are being born.

Rhino extinction has become a dire issue in recent years and continued action is required and therefore, we are proud to partner with the Great Plains Foundation & the Rhino’s Without Borders project to help ensure the protection of the “Chubby Unicorn!”  The project aims to translocate 100 rhinos from high-risk poaching areas in South Africa to the comparative safety of Botswana - so that not only will our children enjoy seeing these beautiful animals in their natural habitat, but hopefully many - many generations of children thereafter.

Faced with a devastating exponential rise in illegal rhino poaching in South Africa, Rhinos Without Borders was formed in order to start moving these endangered animals away from the poaching hotspots to a safer environment.

Where appropriate, the rhinos will be transported by air as opposed to road, in order to shorten the journey and lessen the amount of stress placed on the animals. The budget to translocate just one rhino is  $45,000. The whole project, including ongoing and monitoring and security, requires a total budget of USD 4.5 million.

Botswana has been carefully selected for its extremely low poaching rates, thanks in part to its “no tolerance” policy when encountering potential threats.

It costs approximately $45,000 to translocate and protect a rhino but every dollar counts if we stand together across the world!

Vet Fees It costs approximately $2,740 to pay for vets fees for attending up to 10 rhino whilst in transit to the release site.

Project operational costs It costs approximately $6,800 to manage the project in terms of government meetings, logistics and obtaining the necessary consents and licenses to move the rhinos cross border.

Quarantine Care Costs It costs approximately $9,140 for quarantine costs that include, care and feed for 10 rhino.

Horn Implants for Tracking It costs approximately $9,845 for telemetry implants for 10 rhino including vets fees, with two needed per animal.

Armed Security Costs Once the rhino are captured they are quarantined for 6 weeks ahead of translocation. This is a critical security period. The security costs for this period are approximately $13,000.

Crates It costs approximately $13,000 for the crates to airlift 10 rhinos, specifically designed to maximize the safety of the rhinos and minimize the logistics costs of translocation of the rhinos.

Project release support initiatives It costs approximately $13,500 to ensure that there is project media awareness and conservation input for the translocation exercise.

Transportation to Airport During the first translocation; including the transit insurance on the rhinos the transportation and security costs totaled $14,875 to transport 10 rhinos from their quarantine bona to the airport.

Capture of a Rhino It costs approximately $18,000 to capture 10 rhinos and deliver them to a quarantine boma.

Transportation to Release Site This is obviously location dependent but the costs of transportation of the 10 rhinos from Maun to safe release sites is approximately $23,000; this includes flatbeds and back up crane trucks.

Post Release Security & Monitoring It costs approximately $206,000 for security and monitoring of 10 rhino for 3 years.

Raised by 19 people in 3 years