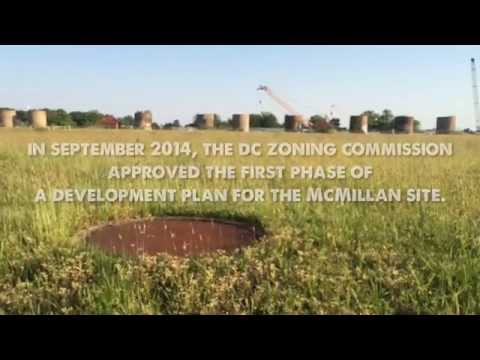 Friends of McMillan Park is a 501(c)3 educational non-profit. Donations to this cause are tax deductible to the full extent of the law. To obtain a letter confirming your donation and the tax-exempt status of the donation, please contact Friends of McMillan Park Treasurer Kirby Vining at 202 213-2690 or at restoremcmillan@gmail.com.

The community movement to save historic McMillan Park has moved into the legal phase. We need your support for the Save McMillan Park Legal Fund to help cover the costs of our cases before the DC Zoning Commission, the DC Mayor's Agent, and the D.C. Court of Appeals where we are challenging the decisions of these two District agencies.

History and Significance: McMillan Park was the first water treatment plant in the city—an engineering marvel and an important element in the city’s aqueduct and water supply system. The US Army Corps of Engineers operated the facility from 1905 until 1986 when the Corps built a new water filtration system on the McMillan Reservoir grounds and sold the Sand Filtration Site to the District Government. The slow sand filtration system ensured the quality and purity of the drinking water and reduced the spread of typhoid and other water-borne diseases. Pierre L’Enfant laid down the template for the boulevards, squares, and circles that make the District of Columbia unique among American cities in 1791. But it was the McMillan Plan in 1901 under Michigan Senator James McMillan that brought L’Enfant’s vision to fruition. That Plan was a result of the work of the United States Senate Park Commission, created in 1901 by the Senate Committee on the District of Columbia on the Improvement of the Park System of the District of Columbia and chaired by Senator McMillan. The Commission included not only Senators and Congressman, but also included many prominent people who had become associated with the City Beautiful Movement, including planner/architect Daniel Burnham, architect Charles McKim, landscape architect Frederick Law Olmsted Jr., and sculptor Augustus Saint Gaudens. The Commission set out to create a comprehensive plan to preserve park space and provide for the recreation and health of the growing city. The spaces chosen for this purpose were primarily hilltops with extensive views of the city, creating an “Emerald Necklace” of parks along the high points of the city as places to escape urban life while still in town. McMillan Park realized that ideal by combining the new below-ground sand filtration system with the above-ground park and landscape created by Olmsted.

The park grounds, which originally surrounded the reservoir on both sides of First Street, NW, were named after Senator McMillan as a memorial to his crucial work on the McMillan Plan by President Taft after McMillan’s untimely death in 1902. The fountain of the Three Graces which originally stood at the corner of First and Channing Streets, NW, was paid for by the schoolchildren of McMillan’s home state of Michigan. The original fountain’s statue is currently visible just inside the First Street, NW gates of the reservoir facility (but not open to the public). Washingtonians enjoyed McMillan Park, one of the city’s first de facto racially integrated parks, until it was fenced off at the beginning of World War II for security reasons, to protect the city’s water supply from feared enemy sabotage. The fountain was dismantled and most parts of the base were moved to elsewhere in the city, and the stone benches that once adorned the park were removed. The Army Corps of Engineers used the facility until 1986 when it completed a new water filtration facility beside the reservoir grounds. The Corps then offered the old Sand Filtration Site for sale to the District, for one dollar if the District chose to keep the land as a park or for market value ($9.3 million) if the District chose to develop the land. The District chose the latter and has offered several development plans for the site over the years, most of them distasteful to the community for the lack of park space contained in the plans.

2006 – Present In 2006, the District Government awarded Vision McMillan Partners (VMP) a contract to propose a plan to develop the site while the District remained the developer. The three VMP partners, Trammel Crow, EYA, and Jair Lynch, have proposed construction of rather massive office and residential buildings, many targeted for the Washington Hospital Center, and demolition of 19 of the 20 underground water purification cells, leaving a rather small park. The plan has been sharply criticized by the surrounding community for leaving too little park space (a recent community survey revealed that 85% of nearby residents want any development to include at least 50% of the land as open, contiguous park space), destroying panoramic views, and demolishing too many of the underground caverns rather than creatively re-using them.

Listen to Hugh Younglood, Executive Director of the Friends of McMillan Park on the Kojo Nnamdi Show, 9/11/2014: http://thekojonnamdishow.org/shows/2014-09-11/roger-lewis-development-and-district

In May, 2019, the D.C. Court of Appeals ruled largely in favor of the city and against us on our appeal of the Mayor's Agent for Historic Preservation's decision to allow the development project to go ahead.  However, the final words of that decision say this:

The Applicants are not at liberty to begin demolition           or subdivision, however, unless the appeal of their           PUD approval is favorably resolved and the           Department of Consumer and Regulatory  Affairs independently determines that they possess the ability to complete the  project." (emphasis added).

We argue that this condition hadn't been satisfied when on August 16, 2019 the city issued a demolition permit.  We had already been trying to contact DCRA about the role the Court gave DCRA in this, and advised DCRA of our position and understanding of this decision's instructions to DCRA.  Nevertheless, DCRA issued the demolition permit on August 16th, and we immediately began a request for injunction.

Friday, December 20th the D.C. Superior Court heard our injunction request in oral arguments.  We think we did very well in presenting the case, but the Court said it would hand down a decision on January 10, 2020.  The Judge said that regardless of the outcome, the Court's decision will likely be appealed, so we'll prepare for that as either plaintiff or defendant in any appeal. Please hope with us that the January 10th decision works in our favor!

Posted by Friends Of Mcmillan Park