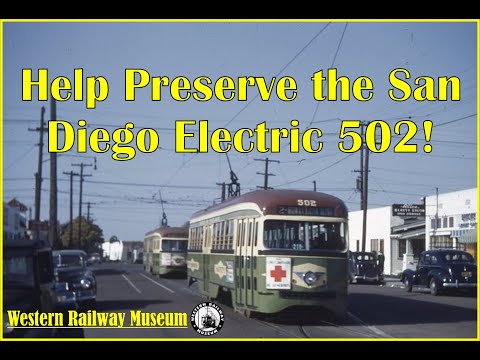 We have a unique opportunity to acquire the first Presidents Conference Committee (PCC) streetcar to arrive on the West Coast. PCCs were the last streetcars built in the United States prior to the Light Rail Vehicle (LRV) era.  San Diego Electric Railway PCC #502  has been offered to the museum. We need your help to acquire and preserve this historic streetcar where it will join our fleet of historic equipment.

For forty-seven years the #502 has been stored outside. The current owner has saved the streetcar though it sits outside and needs proper preservation. Once we acquire the streetcar we plan to preserve and display the car, protected from the elements, for future generations to enjoy and, hopefully, some day experience what it was like to ride this very important part of California electric railway history.

The Mission of the Bay Area Electric Railroad Association, a 501 (c) (3) non-profit, and the Western Railway Museum (WRM) is to preserve the regional heritage of electric railway transportation as a living resource for the benefit of present and future generations. The 502 fits perfectly in our mission of preservation. Can you help us reach our goal to save the 502 for future generations to see and learn from?

History of the San Diego Electric 502

The San Diego Electric Railway ordered 28 PCC cars in 1937 to replace aging equipment, modernize its system, and bring back passengers that were moving to the automobile. SDERy is among the first streetcar systems in the United States to purchase the streamlined PCC car, and the 502 is the first PCC to arrive and see service in California.

During World War II, the 502 was one of two cars painted red and blue for the American Red Cross's blood donation campaign. In 1948 National City Lines purchased the San Diego Electric Railway, and by 1949 the SDERy closed its streetcar lines in favor of busses. In 1950, 502 and 16 of its sister PCC cars were sold to El Paso City Lines for service on the international loop between El Paso, Texas, and the Mexican border city of Ciudad Juarez, Chihuahua, where it was numbered 1500. The cross seats were replaced with longitudinal seating, so customs officials could check passengers quickly as they cross the border. This line was closed in 1973, and El Paso City Lines shut down a year later. Instead of scrapping the cars, the City of El Paso decided to store them long-term at a closed airfield. The San Diego Electric Railway Association in 1984 purchased the 502 in hopes to restore it and use it on the new light rail line in San Diego. The 502 was stored in the San Diego Trolley yard for some time until MTS staff ordered them to move out. Sometime after moving out the 502 suffered from an arson fire. After this SDERA was unable to raise sufficient funds for a full restoration. It was then sold to a private owner in 1998 for a proposed streetcar line in the South Lake Tahoe Area. This never came to fruition. Now the Bay Area Electric Railway Association has a chance to acquire this historic artifact and preserve it as part of the collection of the Western Railway Museum.