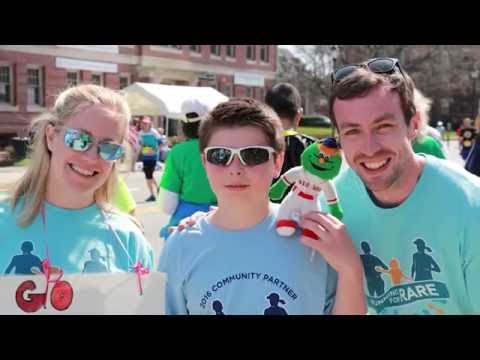 I haven't always been a runner. I was the kid on field day that refused to run a mile, and I forced everyone to wait for me to walk it. I attempted to start running later as an adult, but after half a block I thought only a crazy person would run voluntarily. It wasn't until I forced myself to start running to benefit my rec basketball play that I got hooked. Since then I've ran 11 5k's, a 10k, 27 half marathons, and 1 full marathon. I am a member of the 100 Half Marathon Club, and have served as a regional ambassador for Half Fanatics. I have ran a few of those races in memory of my mom, who passed away from Lymphoma in 2005. There is a massive amount of charities out there to run for, but human nature draws us to causes that hit close to home.

My niece and goddaughter, Brooklyn, was born early in June 2018. Although she spent her early days in the NICU, everything appeared to be as expected. However, shortly after going home Brooklyn started showing multiple issues and regularly appearing to choke. Brooklyn's mom, my sister-in-law, quickly became a full-time dependence for her. Many trips back to the hospital weren't fruitful at all, as nurses and doctors didn't seem to believe the mother. The only real diagnosis they've received is dysphagia, a swallowing disorder, but well after multiple doctors assumed it was just bad reflux. This limits what real food can be eaten, and requires a tube to make sure enough nutrition is received. Even with the tube feeding, Brooklyn still struggles to gain weight and meet milestones. So far doctors have not found the root of her issues, and genetic testing only found a rare gene mutation they've never seen before. That gene could mean nothing, or it could be everything. Unfortunately, there isn't any known information about it to be sure.

Brooklyn has seen multiple hospitals, and is likely to see even more in her future. As Brooklyn is undiagnosed and shown to have a rare gene, I found it quite fitting to become part of the Running for Rare team. I will be running in Kansas City's 2020 Hospital Hill Run half marathon for a few reasons. This run takes us right by the Children Mercy's hospital that Brooklyn has spent time at, provides a central spot for family to join us, and will be one week before Brooklyn's 2nd birthday.