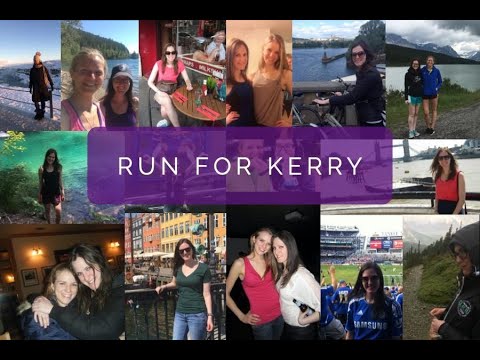 Sometimes you meet people that make a lasting impact on your life. 10 years ago, when I was in college, I became friends with Kerry. She is one of those people that cannot be described in just a few words, but Kerry was truly an incredible woman. She was caring, smart, loving, witty, sarcastic. She loved to travel, her favorite food was Mexican, and her true passion - soccer; she could school anyone who tried to challenge her knowledge on the matter.

Around the same time I met Kerry in 2010, I decided to sign up for my first marathon in order to qualify for the Boston Marathon. Kerry's support was unwavering. She'd revel with me after the good runs and pick me up after the bad ones. Often times, I'd come back from a long run and message her with a "I just finished 18 miles!" to which her response would be "Great! I'm on the couch eating Oreos and watching soccer!!"

As 2018 approached, Kerry began exhibiting peculiar symptoms. She saw doctors, specialists, and they ran a wide variety of tests trying to find what was causing all of her discomfort. All of these returned inconclusive and left us with more questions than answers.

In April I geared up and ran the Boston Marathon, Kerry's wasn’t completely feeling herself the day of the race, but her support was truly amazing. It didn't stop her excitement and enthusiasm which helped carry me through the race. She tracked me throughout, all the while sending excited and uplifting texts.

As I prepped for a half marathon in Montana for that June. Kerry suggested that we make a trip out of it. I would run the race and then we would go explore. Unfortunately by June you could definitely tell that something was wrong. Still no progress from the doctors, but she didn't let it ruin our trip. She was determined and strong willed, we hiked and explored and enjoyed our time out there.

When we returned to New York, she was admitted to the hospital. There she was finally diagnosed with Pancreatic Neuroendocrine Tumors, a rare form of cancer. Unfortunately, because it had gone undiagnosed for so long, by the time they knew what was going on, there wasn't much they could do. Kerry passed away about a month after being admitted.

For the 2020 Boston Marathon, I partnered with the ‘Brave Like Gabe’ Foundation to raise money for rare cancer research. The foundation was founded by a runner, Gabe, who was a professional runner was also diagnosed with a rare cancer. Her story inspired me because even after the diagnosis, treatments, and relapse, she never gave up. She kept running and began the foundation to give hope to others. The determination, fight, strength, and optimism she showed were characteristics that Kerry also shared.

I ask you to please donate and help us prevent others from having to say Goodbye to the ones they love.