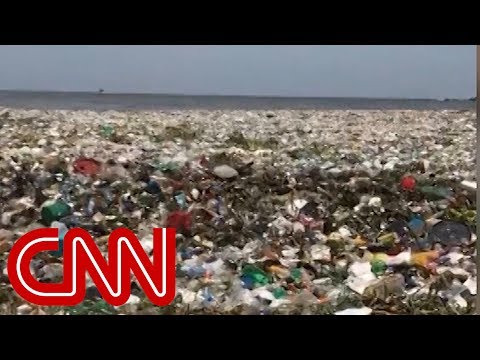 Plastic Emergency in the Dominican Republic

Late last year, images of trash-covered beaches in Bali shocked the world and prompted the government to declare a ‘garbage emergency’. This summer, people in the Dominican Republic faced an equally apocalyptic scene – wave after wave of plastic debris rolling in at Montesinos Beach in the capital and elsewhere on the island. The world was shocked by our images, taken on-site as we got to work on the clean-up effort. As the dense garbage carpet rippled in the surf, individual items ranging from plastic bottles to styrofoam takeout boxes could be seen poking out – symptoms of our global disposable plastic culture and one island’s struggle to stem the tide.

“IN THE PAST WE SENT POSTCARDS WITH MAGICAL BEACHES AND PALM TREES. NOW, IT’S WAVES OF PLASTIC TRASH. UNLESS WE ALL ACT NOW, FUTURE GENERATIONS WON’T EVEN BELIEVE THE POSTCARD SCENES EVER EXISTED.” – CYRILL GUTSCH

Parley joined forces with the navy, the army, public workers and the municipal government in Santo Domingo. Over 500 public workers were mobilized for the operation, and after three days of work teams had collected 30 tons of plastic. Heavy machinery was drafted in to deal with the massive volume of debris, and eventually over 1000 tons of waste was hauled from the waves.

We can’t let scenes like this become the new normal. Parley is working on a long-term plan for the Dominican Republic and will remain on the ground there. As part of the Parley AIR strategy, we will continue to organize ongoing clean-ups, implement education initiatives, track the waste to its source and develop waste management strategies with our local partners. Help us create a cleaner future for the Dominican Republic and other island nations.

Help us create a cleaner future for the Dominican Republic. All proceeds will be used to fund long term solutions in the country, like our pilot program in Samana to improve local waste disposal.

We’re currently working on clean ups in Bajos de Yuna National Park and other sites around the Dominican Republic. Join us and get involved on the frontline.

Parley for the Oceans is the space where creators, thinkers and leaders come together to raise awareness for the beauty and fragility of the oceans and collaborate on projects that can end their destruction.


Posted by Parley For The Oceans

Parley For The Oceans

Parley For The Oceans