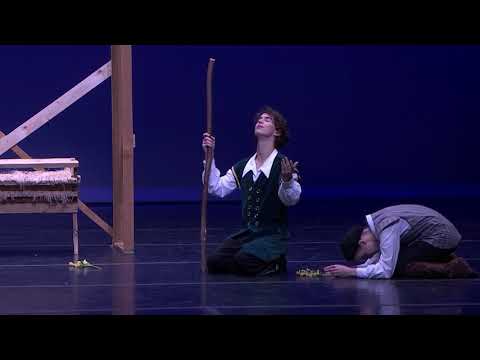 "One Life: The Movie" - A Christmas Story Ballet

We're making a movie!  Would you like to help?

25 years ago, my wife Lana and I had the idea to make a movie about the life of St. Nicholas, the real one who lived back in the 4th century AD. His story is fascinating, but not many people have ever heard about it.

7 years ago, we finished writing a book about the life of St. Nicholas called "St. Nicholas: The Believer." Many have read it and have been blessed year after year as they hear this heartwarming new story for Christmas based on the old story of St. Nicholas.

1 year ago, a Christian dance company in South Carolina was looking for a new Christmas story to stage for their dancers. When the director, Cynthia Dewar, searched online for "a new Christmas story" she pulled up our book, thought it sounded interesting, and ordered it.

She says she fell in love with the story immediately and passed it along to her co-director, Erin-Elizabeth Morton. Together, they carefully composed a note to me asking for permission to stage the story for their Christmas performance with over 200 dancers from their studio!

I was thrilled that they wanted to stage the story and that their hearts for the Lord and commitment to excellence were fully in line with mine.

A few months later, when I saw the show they put together, I said, "We've got to film this! This has to go out to the whole world!" I believed it would give  boundless HOPE to millions.

SO THIS YEAR, we're making a movie of the production  in order to get it out to as many people as possible all around the world!

Would you like to help? We've hired a film crew of some of the best filmmakers I know, rented some of the highest caliber cinematic cameras, and are working to create an awesome experience that families will want to watch over and over and over again for years to come.

I've committed to doing this project personally, no matter what it takes, because I'm THAT BIG of a FAN of their show! But many of you have asked how you can be involved too,  and to be honest, I would LOVE your help! "Many hands make light work," and your hands  holding mine, will help to lighten my load as we finish crafting this beautiful new movie.

This is  FUN! I love everything about this project.  And I would love for you to be a part of it.

For your donation of any size, I'll  be glad to send you a sneak peak of the movie before we unveil it to the general public. Just be sure to include your email address with your donation so I can send you the link!

Thanks so much for your support!

With  love and appreciation,

Producer of "One Life: The Movie"

To order the paperback from Amazon, visit: http://amzn.to/1llznmj

P.S.  I’ve  posted  a  scene  from the ballet at the top of the page. I can't wait to share all 21 scenes with you when the movie is finished!