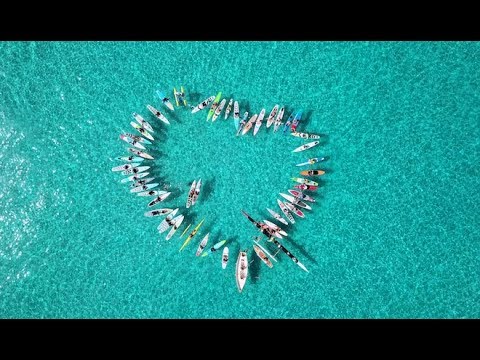 Join Matthias Fretz and Dixie Vodka founder Matti Anttila on an epic journey accross the ocean as they paddleboard from the Bahamas to Florida as part of The Crossing For A Cure. The 80 mile paddle, taking place on June 15, will raise over $500,000 for Piper's Angels Foundation, benefiting families battling cystic fibrosis (CF).

The Crossing For A Cure is a long-distance endurance paddle challenge and international championship that takes paddlers 80 miles across the Gulf Stream from Bimini in the Bahamas back to the Florida mainland in Lake Worth. The event was inspired because of the incredible health benefits of the Ocean for those living with cystic fibrosis. Travis Suit's daughter Piper was diagnosed with CF when she was four years old.

Based in Charleston, South Carolina, Dixie Vodka is the spirit sponsor of The Crossing For A Cure. Dixie is an independent, American-made craft spirit with roots in the New South renaissance. The distilling process mirrors qualities of a true Southerner: an appreciation for craftsmanship and taking time to do things right, but never slowing down. Each of our expressions are 6x distilled from all-American corn, 80 Proof and naturally gluten free. The largest spirits brand produced in South Carolina, the largest premium craft vodka produced in the Southeast and the 9th fastest spirits brand in the United States, Dixie received the prestigious Rising Star Award from the Beverage Information Group in 2019, awarded annually to the industry's fastest growing brands. Dixie is a Certified South Carolina Product and a proud member of 1% For The Planet.

Cystic fibrosis is a progressive, genetic disease that causes persistent lung infections and limits the ability to breathe over time. In people with CF, a defective gene causes a thick, buildup of mucus in the lungs, pancreas and other organs. In the lungs, the mucus clogs the airways and traps bacteria leading to infections, extensive lung damage and eventually, respiratory failure. In the pancreas, the mucus prevents the release of digestive enzymes that allow the body to break down food and absorb vital nutrients.