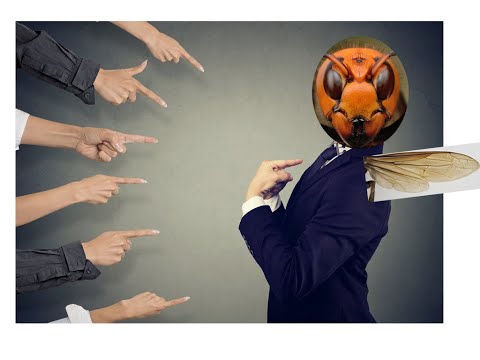 Murder Hornets: A New Musical For 2020 (a fundraiser for musicians affected by the pandemic)

DONATE NOW TO THE HIGHLIGHT OF THE SUMMER 2020 THEATER SEASON

Synopsis: A pop-crossover band of French hornists are touring with their backup dancers, The Hornettes. End of scene 2, their manager is murdered. Everyone has a motive. At the end of Act 1 the investigation leads the ensemble to a secret government lab where a series of comic mishaps mutate them all into enormous hornets. The search for the cure and the search for the murderer become intertwined in MURDER HORNETS: A NEW MUSICAL FOR 2020.

As we hit our fundraising milestones, we will release more songs and unravel more plot....

Available now: "My Love Has Wings": sung by the leading-man character Kyle Copeland (Act 1 Scene 3) about his secret love for Tinsley, the lead dancer of the Hornettes.

MET GOAL $500: "Hindsight is 2020," sung by Angela Argyle in the musical's penultimate scene, reflecting on the  personal and phylum transformations she and the gang have undergone.

MET GOAL $1000: "What the.... is Going On?": a villain aria sung by Chad Chadsworth about his plans to destroy the Horn Fifths and start a rival quintet, The Double Horns.

MET GOAL $2000: "Who Can The Murderer Be(e)?,"  The ensemble at the end of Act 1, in which the gang nearly discovers the murderer while pursuing their respective love interests, before tripping into Dr. Moandelhive's Insectinator and mutating into  giant hornets.

$4000: "My Natural Horn, My Natural Love ," Kyle Copeland's Act 2 banger where he reveals his love for Tinsley and reflects on his insecurities about his past

$5000: "The Murderer and Antidote Is...",  an ensemble song, led by Det. Pipi Laquette, in which the murder and antidote are both finally revealed.

...and more surprises if we surpass our goal!

GET ON BOARD NOW for this sure-to-be-sensational musical. In the words of our producers:

Also... just to be clear, this is a fake musical that we have no intention of actually staging and we're just presenting as a parody to put the FUN in fundraiser. But we will write and record these songs if/when/as we meet these fundraising goals!

Proceeds go to the Musicians Foundation, an organization that provides directed grants to  musicians whose livelihoods have suffered from the COVID-19 pandemic.

Also: if you are a singer who would like to record/cover our songs, we are HAPPY to send you the accompaniment tracks! Just let us know at murderhornetsthemusical@gmail.com