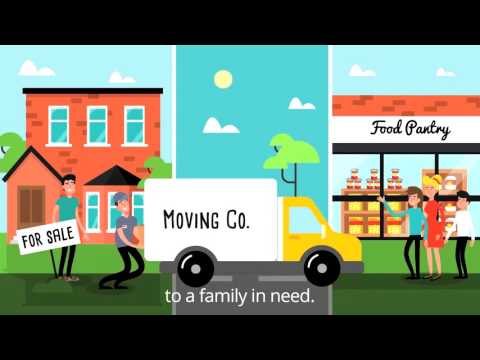 Established in 2009, Move For Hunger (MFH) is the first and only non-profit mobilizing relocation professionals to simultaneously fight hunger and food waste by collecting unopened, non-perishable food from people who are moving and delivering it to local food banks. MFH has replicated this model across North America by developing formalized, innovative food-rescue programs.

Though 41 million Americans struggle with hunger annually, an incredible forty percent of the food produced in the US still ends up in landfills. When people move they throw away a lot of “stuff.” Unfortunately, some of this “stuff” is perfectly good food that could be given to a family in need rather than be thrown away. Over the last decade, MFH has built an ever-expanding network of more than 1,000 relocation companies that help rescue food during the moving process. Together, this network has delivered 13 million pounds of food, enough food to provide over 10 million meals to individuals and families in need.

MFH leverages the existing transportation resources of entire industries to collect and deliver food to food banks. Through MFH’s programs, food banks receive regular, year-round food deliveries without expending any additional overhead costs, while increasing food access to those in need. MFH also educates millions of people on the issues of hunger and waste. Finally, MFH gives individuals moving an easy opportunity to contribute to a powerful movement with large scale collective impact through a simple charitable act.

At the heart of MFH’s model is the notion that a lot of small actions can add up to a major impact. Beyond rescuing as much food as possible to fight hunger and reduce waste, MFH is ultimately working to create attitude and behavioral shifts in communities, within all demographics, backgrounds, and social standings, so more food is rescued instead of wasted.  In addition, MFH strives to essentially change the standard operating procedures for entire industries to include a culture of food rescue in their daily processes.  Participating partners are seen as adopting more sustainable and socially responsible business practices which can then be marketed to current & potential clients and customers.  After all, doing good is good for business.

Many people, inherently, want to do good. MFH makes it easier for them to take action. Ultimately MFH is creating a win-win for all parties involved.

MFH’s goals for 2019 are consistent with its vision of expansion and growth, and include collecting 3.6 million pounds of food, almost one-third of the overall collection in MFH’s ten-year existence, expanding their Apartment/Multi Family Program to over 1,500 properties, and continuing to develop ways to create innovative and sustainable ways to rescue food.

Since launching its Apartment/Multi Family project, MFH has been intentional about identifying and building relationships with industry leaders in property management, corporate housing, and multi-family housing associations to increase its network and food rescued. MFH conducts targeted outreach to relocation councils, property management companies, and apartment associations across the US to unite and organize even more community members to move the needle on hunger and food waste.

With a strong foundation of invested partners that are already determined to help the cause, MFH is uniquely positioned to incorporate these practices throughout the multi-family/apartment industry - significantly increasing awareness and rescuing even more food for families in need.


Posted by MOVE FOR HUNGER

A Community Thrives Tier 2 - Click Here for the Official Rules