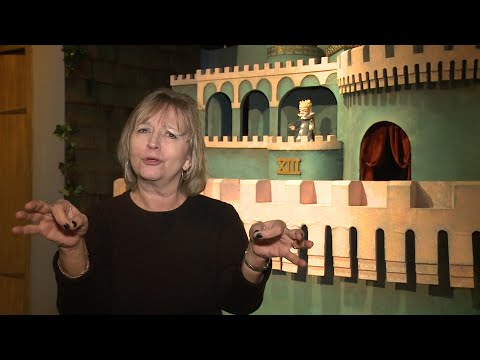 Raised by 28 people in 9 months

One story Kim shared with Family Communications had particular impact on their decision to work with her.  While working at a residential school for the deaf she encountered a distraught teenage deaf student.  This student typically pleasant and outgoing learned through his counselor that the cousin who visited his home regularly to do laundry was actually his older brother.   His family, though well-intentioned, simply did not have the sign language skills to communicate with him beyond the concrete skills of daily living such as eating, sleeping, and hygiene which are often communicated through gestures or homemade signs.  Abstract concepts like familial relationships require fluency in a real language such as American Sign Language.

The next several years Kim spent researching which children’s programming included sign language and which Mister Rogers’ Neighborhood episodes would be best for deaf children.  After earning her Master’s Degree in Deaf Education in 1995, she began teaching at the Western Pennsylvania School for the Deaf (WPSD) where she met producer/director James DeBee.  While watching James' video production of the WPSD prom, she felt like she was watching a Hollywood production!  He possessed the key ingredients of kindness, professionalism, talent, and leadership to make the Mister Rogers' ASL Friends project a success.  Enjoy James’ summary of their introduction and the years that followed…https://www.youtube.com/watch?v=8yVhlj89CmU

In 2002, we received a powerful endorsement from The Barbara Bush Foundation for Family Literacy. Executive Director, Benita Somerfield underscored the critical importance of a shared language in the home for children to achieve language acquisition and literacy. She felt Mister Rogers’ ASL Friends would be an excellent vehicle for attaining these goals for deaf children. [see photos]

By 2005, under the guidance of Gary Hitechew at Laurel Capital Corporation, ASL Readers, Inc. (currently ASL Friends, Inc.) incorporated into a non-profit organization for the purpose of adapting English-based educational materials into American Sign Language. The founding board consisted of ladies with a wealth of experience in deaf education, accounting, law and production including: Shelley Schurer, Nancy Gleyze, Kate Murray, and Susan Di Iorio Miller. These ladies shared the common thread of motherhood and understood the importance of a shared language in the home.  Though the years, ASL Friends has been guided by the volunteer efforts of dedicated board members: Dianne Gallagher, Donald Kovacic, Karen Shepherd, Laura Clark, Ursula Lesic, and most recently Christi Dowd.  In the following weeks we will hear from founding board members, President Kim Nussbaum and Vice President Susan Di Iorio Miller.

Let's meet Kim Nussbaum as she shares why "Mister Rogers' Neighborhood" was selected as a language model for deaf children.  https://youtu.be/82MIaIJ6YuY

Sue Miller shares with us the reasons why she became involved with ASL Friends, https://youtu.be/YWudOIDsbu4

One of the key players on "Mister Rogers' ASL Friends" is award winning, Pittsburgh native Mary Lou Novitsky!  Mary Lou enjoyed great success on PBS and the Discovery Channel by co-hosting Deaf Mosaic with Gil Eastman.  Mary Lou also served as a senior producer with the program which ran from 1985-1995.   Meet "ML!" https://youtu.be/Ui8ooMyeOz8

Any funds solicited for ASL Friends, Inc. are not being solicited by, or on behalf of, Fred Rogers Productions.

Raised by 28 people in 9 months