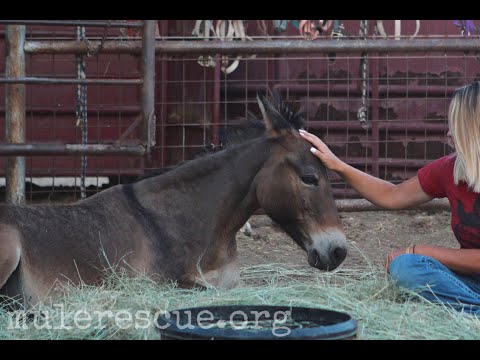 Matthew the mule is a true survivor.

Yesterday was like a lot of days for Peaceful Valley Donkey Rescue - Central Region and Lost Meadows Mule Refuge. LMMR was working on extending some pens, and PVDR-Central was receiving a flatbed full of round bales when a case came in near Stephensville, Texas. The case was for a donkey, so PVDR hit the road with a trailer in tow.

After PVDR arrived, I received a call saying that the donkey was actually a young mule, and that his feet were in the worst possible shape. An altercation broke out between the owner and a relative about whether to let us take the unnamed “donkey”. The relative insisted that he was her pet, although the “donkey” and the land belonged to the owner. When the fight was over, it was up to our staff to go find him out on 40 acres. When he was finally found, he struggled out of the bushes towards the sound of a feed bucket. He had to be hoisted into the trailer as he was in so much pain and was unable to make the jump by himself.

Hearing all of this left a pit in my stomach. I prepared a quarantine area for him and waited till dusk for the trailer to return to San Angelo.

Many of the hoarding and neglect cases that we see are the product of mental illness and drug usage. No one in their right mind would allow Matthew to suffer the way he has. When the trailer doors opened, my heart sank as I looked upon a mule who could not take a single step without buckling down in pain. He limped from the trailer to a corner of the pen, breathing heavily and struggling to keep his balance. Matthew had been fed nothing but alfalfa for 5 years and is very obese. His legs and misshapen feet hurt even more under all that extra weight.

I suppressed my sadness and talked quietly to Matthew, telling him it would be alright and that we would get his feet fixed first thing in the morning. We gave him water which he gratefully began to drink. Then we sprayed him down with fly spray and made him a bed of soft hay. Within minutes he was lying down and dozing off, totally exhausted from the pain of trying to keep himself upright. Sitting beside him as he slept is when I named him Matthew.

Every step for Matthew was torture, and as luck would have it a farrier was already scheduled this morning. At 6:30am Matthew got his feet trimmed to where he can hobble around enough to get food and water on his own.

He is now at the vet getting radiographs so we can start the long, agonizing process of returning his feet to some semblance of normal. According to our vet it is likely that regular trimming will not be enough to fix the damage, and that Matthew will need to have surgery. A simple phone call to our Refuge, just a couple hours way from Matthew all this time, would have prevented this situation years ago.

It will take many, many months of rehabilitation to correct the gross neglect of Matthew’s feet. His teeth are also in awful shape, so he is getting a dental float from our veterinarian today too.

The saddest part of all of this is that Matthew is completely willing to cooperate with his care. From lifting him in to the trailer to cleaning his wounds, he has been nothing but gentle and kind to us.

We need your help with the cost of Matthew’s rehabilitation. Like so many other mules at our Refuge, he had been discarded and left to fend for himself, requiring extensive care to become healthy again. If you support Matthew and our efforts for mules in need, please donate to Matthew’s GoFundMe or text MULES to 41444 to donate via our website.

We are the only U.S. Mule Refuge.