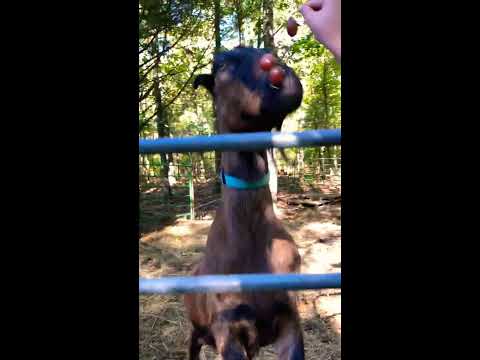 A home is a dwelling where someone can feel welcomed, loved, and needed by the members living there. Our family of furbabies, feathered friends, and everyone else under the sun has forever changed my view on what exactly family can mean. Life's hardships and lessons have taught me to believe that, as an emotionally intelligent species, we should know better than to continue to allow the immoral and unethical treatment of animals under the jurisdiction of our government simply because it has always been that way. It remains law to allow one species as a pet or companion and yet allow another on your plate. Why? Can't humans see the disconnect there?

That's why I was so happy to create Farm Critter Haven as a certified 501(c)(3) nonprofit with my mother, Pat Kagan, when my children and I moved into her home in 2016 after leaving an abusive marriage. Growing up there I remember she had so many animals on her property. Everything from an emu to goats but pigs were always one of her favorites. It went without question that, since my mother now had help, she was going to rescue again. First it was a few chickens, then a couple of pigs, and then our sweet cattle, Daisy Mae.

Animals are incredible at healing. Somehow, they offer this ability to ease suffering from depression, anxiety, pain, and other obstacles without even knowing they’re helping you. I could not have healed thouroughly like I did without these rescued animals with the hope and love they bring into my life. I feel like it should go without asking to then care for them in return. It feels like an honor and their healing ability should not be taken for granted. I certainly don’t believe humans should ever hurt animals. That goes for eating or wearing them, too. I've made it my life's mission to help other humans understand the connection between animal abuse and domestic abuse.

As the first vegan animal sanctuary located in Egg Harbor Township, New Jersey Farm Critter Haven has connected so many people to the concept of veganism and the prevention of animal cruelty. However, without updated zoning ordinances put into place that will allow for potbellied and mini pigs to remain here lawfully our sanctuary was forced to relocate to a safer location where our entire family can remain together. My mother wished to remain separate from our mission in Spring 2019 and the Mission for Marley Meadows began...

My name is Heather Ailie and my fiancé, Steven Podolsky, and I created Marley Meadows Animal Sanctuary. An all vegan animal sanctuary dedicated to the rescue, advocacy, well-being, and public education of rescued farmed animals and vegan awareness. Our mission to help rescued animals rescue people through compassionate learning, one on one interactions, and emotional connection can help bridge the gap needed in ongoing abuse problems. For example, it is statistically known that children who abuse or mistreat animals throughout childhood and go uncorrected will often turn into abusive adults who have no remorse for their hurtful actions. On the contrary, if that child is taught that his or her actions of harm on that animal were wrong and hurtful then maybe they will not choose violence as an answer to their problems as children into adulthood instead? I raised my 3 children with the idea that we harm as little on the Earth as possible and help as much as we possibly can.

In late Winter 2018 Steven and I rescued Marley and Dakota, two Holstein calves, from the filthy dairy farms of the Amish in Lancaster, PA. Said to both be bulls destined for veal slaughter within a few short months, we later found out that our sweet Dakota was actually a female. We had a boy and a girl! But why would a lucrative dairy company give up a profitable “machine” to us? There was no way it was a mistake. They knew what they were doing ALL too well. The only thing we could conclude amongst our team was that Dakota was a twin to someone (and it quite possibly could be Marley!!). When a cow has twins and one is born a bull and the other calf is born a heifer 90% of the time the female is born infertile. An infertile heifer, or freemartin, is not found to be an asset in the dairy industry thus she would be killed instantly or sold off for veal. Therefore, we think we were able to get her from the farmers because she was no use to them. Dakota Trey and Marley Grey quickly gained a brother, Morty Plae, from the very same farm a few months later when he was dropped off at our sanctuary with a case of mistaken identity! Said to be Jersey breed, which is smaller and brown, Morty was clearly a Holstein with his adorable speckled nose and spots throughout. Even though we were going to struggle with yet another huge cow to feed and house how could we possibly turn him away? So, we than had 4 beautiful Holstein bovines when we included Daisy Mae.

Cattle eat a lot. It’s not just a saying. They really do! Alpacas do not. Which is why we agreed to take 5 alpacas, along with a large group of poultry and a mini pig named Zeke, during the Spring of 2019. They all came from a garden center in Cape May County, NJ where there was originally 60 alpaca in their herd. Within a few short years there were only the 5 alpacas left that we took home that day. We saw an alpaca body under tarps behind their torn-up enclosure, the chicken coops were filthy and unlivable, and the ducks had no swimming source. And Zeke. Poor Zeke. Originally named Freak, he came from NYC and found his way to the garden center as a lone pig and renamed Zeke. We are so happy to have rescued all of them and brought them to our sanctuary forever. With the combination of the animals rescued between the efforts of Farm Critter Haven and, now, Marley Meadows Animal Sanctuary we have over 100 resident rescued animals!

Daisy Mae was not raised with adaquate nutrition under my mother's care. She fed this tiny cow the same way she fed her horses and she became malnourished. By the time Steven and I had control over her care it was too late and the damamge done to her joints and bones was horrible. We tried everyhting in our humane efforts to help her recover after she was found unable to get up one early morning, but her body was just too weak to go on. There's not a day that goes by that I don't think of Daisy Mae and the valuable lesson of having compassion for all life that she taught me. We rescue on in her memory.

After almost a year of searching every possible outlet we have found a new home to call Marley Meadows Animal Sanctuary. We had asked for help from our supporters and animal lovers with securing the property and many people kindly answered. Thank you! One donor and close friend in particular (who is now a board member) and we are currently renting this 8 acre property from him. We were not able to raise the down payment but, fear not, we have been blessed to have our generous friend help us and get the animals safely home.

UPDATE: We have been unpacking, restacking, and creating and amazing home for everyone here. Upon moving in we adopted a cat colony and have been very busy with TNR and vetting everyone. We currently have 15 house cats, 9 which are kittens! Since we do not have an adoption program in place just yet all the tamed cats stayed inside (including 3 babies who were feral and now are total lovebugs). The costs of each surgery, vet appointment, their feed and litter and toys, of course, are all paid for by us. The pandemic had really slowed down donations and we are still really struggling to keep up.

We now have a Patroen account set up for anyone who wishes to have an insiders look at what we do.  https://www.patreon.com/MarleyMeadowsNJ

Also, we are continuously creating new merch at our Bonfire Store dedicated to Mae. https://www.bonfire.com/store/maes-market/

We took in several animals since relocating and we still need your support to keep everyone happy and healthy. Please consider donating to our cause. Thank you for taking the time to read through my campaign, it means so much to my family and me. For any more information and for the latest updates about the animals at the sanctuary please follow us on our social media networks.

Remember, we are a 501 (c)(3) nonprofit charity and your generous donation will be tax deductible on next year’s tax return! With this new GoFundMe for Charity we will have no fees deducted so that your donation can make the biggest impact. Thank you from all of us at Marley Meadows Animal Sanctuary.

Once the business becomes established and the pandemic calms down, we cannot wait to begin our outreach programs connecting human and animal. This 1:1 therapy helps create vegan awareness and helps with the prevention of animal cruelty in southern New Jersey.