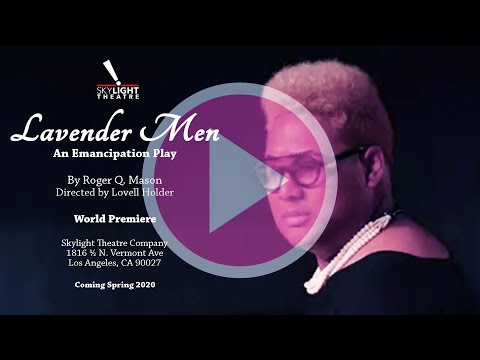 We only have three weeks (February 15 - March 7) to fundraise before rehearsals start. Any contribution you can give helps bring this daring  LGBTQ theatre to Los Angeles.

LAVENDER MEN, written by Roger Q. Mason, is a historical fantasia which follows Taffeta, a self-proclaimed "fabulous queer creation of color," who invades the private world of Abe Lincoln to confront issues of visibility, race and LGBTQ+ inclusion that still challenge us today.

The play was developed in Skylight's PlayLAb, an incubator for brand new work that speaks to today's audience.  Fresh off the LAb Works festival and a sold out reading on Broadway at Circle in the Square, LAVENDER MEN will receive its world premiere with Skylight Theatre Company in April/May 2020 directed by Lovell Holder.

To bring LAVENDER MEN to life, we are raising $8000 to provide our actors fair rehearsal wages, healthcare benefits, and performance compensation as outlined by the Actors Equity Association. With your help, we can properly honor and respect our artists' work in this show.

Consider making a tax-deductible donation to our campaign today. All proceeds go directly to the actors involved with the world premiere of LAVENDER MEN.

$10 - Thank you shout out on social media

"Sweeping and engaging, LAVENDER MEN  is like a giant slayer; tackling themes of erasure, intersectionality, and hegemony in a direct and illuminating way.  It thrills me to know this genre-shifting piece will contribute to the conversation and landscape of daring new work being producing in our current climate." - Adam Hyndman, actor/producer (NYC)

Roger Q. Mason (writer) is the recipient of the 2020 Chuck Rowland Pioneer Award for achievement in playwriting.  His work has been performed on Broadway at Circle in the Square Theatre (Circle Reading Series); Off and Off-Off Broadway at New Group, American Theatre of Actors, New York Theatre Workshop, Access Theatre, Flea Theatre, and the Kraine; and regionally at McCarter Theatre, Ensemble Studio Theatre/LA, Son of Semele Theatre, Chicago Dramatists; Victory Gardens and Serenbe Playhouse. His play THE WHITE DRESS was a finalist for the Screencraft Play Contest, judged by David Lindsay-Abaire, and a finalist for the Lark's Playwrights Week.  His piece HARD PALATE was a New York Theatre Innovator Award nominee. He is the winner of the Hollywood Fringe Festival Encore Award.  Mason holds an MFA in Writing from Northwestern University, MA in English from Middlebury College, and BA in English and Theatre from Princeton University.  He's a proud member of the Dramatists Guild of America.

About Skylight Theatre Company: We believe in the power of the Artist to create change. Skylight expands the boundaries of mainstream theatre through the telling of relevant and more inclusive stories. A vibrant family of artists, Skylight Theatre Company discovers, develops and produces new works, introduces plays new to Los Angeles, and educates and nurtures the people that create them. Dedicated to diversity, equity and inclusion, we make stories come to life.