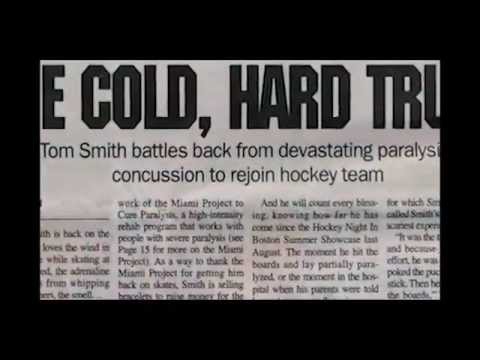 On April 21, 2008, I was fortunate enough to run the 112th Boston Marathon. When I ran Boston in 2008, I was a senior in high school and a rising hockey player. After high school, I signed a JR. A hockey contract to better leverage my chances of playing hockey at the collegiate level.  While playing in my second tournament with the Boston Junior Bulldogs, I was skating down on an opposing player who was on a break away. As my goalie and him collided, I tried to jump over them to avoid the collision. Unfortunately, my skates hit the player and I went head first into the boards. I was immediately paralyzed and my life was forever changed.

After intense rehabilitation in Miami, Florida, I was able to beat paralysis in what Doctors called “a miracle recovery.” After being told I was no more susceptible than the average person to get hurt again, I returned to hockey in pursuit of a collegiate scholarship.

In July 2009, I returned to the ice. After a very successful training camp, I was ready to pursue my dream once again. After several games, it seemed as though my dream of being a collegiate hockey player was within reach.

Then on Oct. 1, 2009, while in a practice, my worst fear happened again.  While skating around the net, I got entangled with another player and again went headfirst into the boards. As soon as I hit the boards I knew I was paralyzed. I was airlifted from Salem, NH to Boston Medical Center where I was diagnosed with injuring a completely different part of my back. As a result, I was paralyzed from my waist down. Doctors said I had a better chance of winning the lottery 5X in a row than having 2 separate accidents totally unrelated. Determined to face and beat paralysis once again, I began my out patient rehabilitation after over a month of being in-patient at Boston Medical Center.  Less than 2 months later, I began moving my legs and started to stand with a walker. I also took steps with the help of my therapists and a walker right before Christmas. Thinking that another recovery was near, I was ecstatic.

However, on January 10, 2010, while stopped at a red light in Revere, MA with my father, we were crashed into by a distracted driver. My father broke several vertebra in his lower back and I re-injured my thoracic vertebra. I had hit rock bottom once again. After being forced to face paralysis for a third time, I approached my therapy with the same mentality with how I approached hockey: DON’T EVER GIVE UP! After this accident, I was fortunate enough to be apart of aggressive rehabilitation programs like Journey Forward. Because of this, I was able to beat paralysis for a third time.

The last time I used my wheelchair was December 2012.  Today, I currently walk with the assistance of lofstrand canes. I am living proof of what comprehensive, cutting edge, aggressive, extensive and most importantly, evidence based therapeutic programs can do. There is no better program or facility in New England that is giving the paralysis community a better chance to walk again than Journey Forward.  This is exactly why I have decided to do the 2018 Boston Marathon on behalf of Journey Forward.

This is going to be a crazy journey for me as it marks 10 years since I ran the Boston Marathon and 10 years since my first paralyzing accident. However, I feel so blessed to be able to walk with my canes everyday and I am honored to be apart of the Journey Forward Marathon Team. No one deserves to live a life that is bound to a wheelchair. I ask that you please help me help those with paralysis regain their lives back just as I have been able to regain mine!

Thank you for your support; I look forward to crossing the finish line on April 16, 2018!