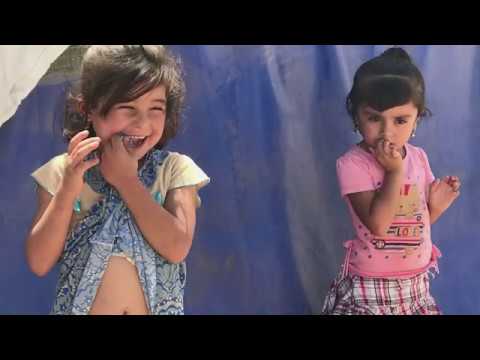 Under the brutal regime of Isis, men were summarily executed, women systematically raped and children taken from their mothers to be indoctrinated as Isis recruits.  Despicable and indescribable atrocities were committed against numerous populations. Most of the survivors are displaced and live in worse than precarious conditions in refugee camps    Today, one and a half million people are living in such refugee camps in Kurdistan alone. These internally displaced people (IDPs) includes various sects, ethnicities and religious background like Yazidis, Sunni Arabs, Kurds, Christian, Shia and others.

About 500,000 Yazidis individuals are living in camps in Iraqi Kurdistan. The Yazidis are only one of the many sad examples of horrendous suffering which have endured the populations under the Isis – Daesh brutal and atrocious control. The Yazidis were subject to repeated violence, torture, summary execution, forced prostitution, repetitive rapes of women as young as 7 years old and murder.

The United Nations recognized the genocide of Yazidis population by the Islamic State (Isis – Daesh) the Yazidis, are unfortunately one of the most persecuted population in Iraq, for their religion beliefs.   Douleurs Sans Frontieres (DSF) has been in activity since 1995 in many parts of the world. Similar in concept to Physicians Without Borders, which also originated in France,  https://www.douleurs.org/ - DSF, a French non-profit organization has been providing free care with benevolent physicians, nurses, psychotherapists to needing populations in many parts of the world.

Today, DSF needs your help for the Iraqi Kurdistan populations, including the camps where the Yazidis are located. In addition of the management and treatment of pain (missing limbs, major burns…) DSF will bring its benevolent physicians, nurses and psychologists to provide help and programs to help victims of trauma, and Post Traumatic Stress Disorder.

From the bottom of our heart and from the heart of these oppressed populations we thank you for your generosity.