Now is the time to Crowdrise.  The Japanese are in the middle of a major disaster.   Please donate to the projects below or start your own fundraiser.  Please just get involved and get all your friends involved.  This is why we Crowdrise.

According to the BBC:  Japan's most powerful earthquake since records began has struck the north-east coast, triggering a massive tsunami. Cars, ships and buildings were swept away by a wall of water after the 8.9-magnitude tremor, which struck about 400km (250 miles) north-east of Tokyo.  A state of emergency has been declared at a nuclear power plant, where pressure has exceeded normal levels.

Officials say 350 people are dead and about 500 missing, but it is feared the final death toll will be much higher. In one ward alone in Sendai, a port city in Miyagi prefecture, 200 to 300 bodies were found.  In the centre of Tokyo many people are spending the night in their offices. But thousands, perhaps millions, chose to walk home. Train services were suspended.

There a tsunami triggered by the quake reached 10km (six miles) inland in places carrying houses, buildings, boats and cars with it. In the city of Sendai the police found up to 300 bodies in a single ward. Outside the city in a built-up area a fire blazed across several kilometers.  Thousands of people living near the Fukushima nuclear power plant have been ordered to evacuate. Strong waves hit Japan's Miyagi and Fukushima prefectures, damaging dozens of coastal communities.  A 10m wave struck Sendai, deluging farmland and sweeping cars across the airport's runway. Fires broke out in the centre of the city.

This is the kind of earthquake that hits once every 100 years. 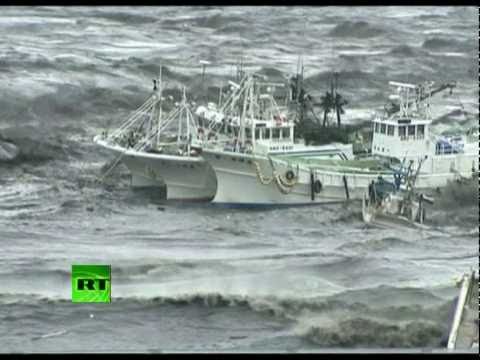