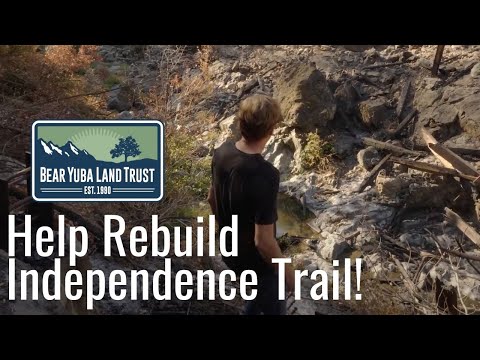 Just outside of the historic town of Nevada City is one of California’s premier hiking spots, the Independence Trail. It is the site of the first wheelchair accessible wilderness trail in the United States and offers nearly five miles of mostly wheelchair accessible trail through dense woodland that opens up to spectacular vistas of the South Fork of the Wild and Scenic Yuba River.

In August, the portion of the trail west of Highway 49, owned by California State Parks and Bear Yuba Land Trust (BYLT), was severely damaged by the Jones Fire, resulting in the loss of bridges, wooden flumes and the Rush Creek Ramp. Independence Trail west of 49 is now closed to the public due to safety hazards, soil instability and destruction of the structures. BYLT, Sierra Gold Parks Foundation, California State Parks and their partners are strongly committed to working together to rehabilitate this community treasure.

Please donate today so we can reopen Independence Trail!

Your contribution allows for the necessary planning and first phase rebuilding of these essential structures. Once constructed, the trail will enable access and connections with nature for all.

Help Us Rebuild Our Independence Trail!

One Man’s Vision: The Story of John Olmsted and Independence Trail

In 1854 the Excelsior Mining and Canal Company, which operated six hydraulic mines in the area, was running short on water from its China Ditch on Deer Creek. In order to ensure the mining operations continued, Excelsior Ditch was constructed between 1859-1863. In the 1970s, naturalist John Olmsted, then a docent at the Oakland Museum, rediscovered the rock-lined ditches, adjacent paths for ditch tenders, and wooden bridges, also known as flumes, which provided access over the steep canyon ravines in the South Yuba River canyon. Upon seeing the old flumes, Olmsted was inspired to construct the Independence Trail using the framework provided by the historic mining legacy. Eventually, this unusual path fulfilled his friend’s lifelong dream of being in nature and reaching out and touching wildflowers from a wheelchair. Through many years of tireless dedication and multiple land purchases, John enlisted the help of many generous donors and a community of volunteers to create the country’s very first wheelchair accessible wilderness trail.

In 2012, Sequoya Challenge (founded by John Olmsted and his wife Sally Cates) transferred ownership of the 207-acre Sequoya Challenge Preserve to the Bear Yuba Land Trust, for eventual transfer to State Parks. The acquired property includes seven separate parcels interspersed with California State Parks land bisected by Highway 49. The trail west of Highway 49 was in the direct line of the Jones fire, and structures on both State Parks land and Bear Yuba Land Trust property were consumed by the blaze.

In September 2020, a multi agency and stakeholder committee formed to plan for the repair and restoration of the Independence Trail to modern standards. This will include surveying, planning, and a phased reconstruction of the trail. Recognizing the historical and community importance of the Independence Trail, there is a joint commitment to rebuild the Independence Trail among public agencies like California State Parks and the County of Nevada, as well as by BYLT and its non-profit partners Sierra Gold Parks Foundation, FREED and South Yuba River Citizens League.

Help us raise $500,000 for the first phase of this monumental endeavor!

It’s going to take a community-wide effort to rehabilitate the Independence Trail and surrounding land for the safety and enjoyment of all!