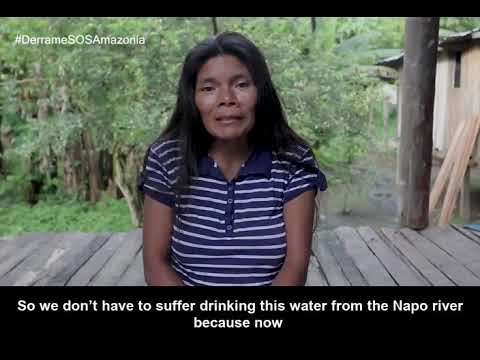 Raised by 15 people in 4 months

During each GISH Hunt, Gishers come together from around the globe to “Change A Life”, making a profound difference in the life of someone facing extraordinary hardship. In the past, we’ve rescued homeless Syrian refugee families from dire living situations; we’ve helped Rwandan female genocide survivors establish independence and be able to feed their families, and we’ve even helped clear unexploded ordnance off Laotian rural farms and established a mobile prosthetics unit for child bombing survivors.
For this Hunt, we’re also doing something truly extraordinary: we’re joining forces with Amazon Watch to help Indigenous women whose land has been pillaged by an insidious, draconian beast wreaking havoc on their farmland: corporate greed and fossil-fuel pollution.  Gishers will take up arms to help impact the lives of four entire communities of Indigenous women and their families. Their land has been destroyed by an irresponsible corporation’s oil pollution, stealing their ability to grow food and bringing unimaginable tragedy, sickness, and even death upon their communities. Together, we’re going to help them revitalize their crops, restore their way of life, and support their fight to help their families regain their health and battle for their own sovereignty.
Their Story
Our focus is on the four communities of Indigenous Kichwa Women who are leading a courageous charge to reactivate their crops and fight for their community economy after their ancestral homelands were devastated by a massive oil spill by PetroEcuador and OCP Consortium in April of 2020. The riverside communities of the Coca River of Ecuador lost their cocoa, corn and cassava crops, due to the Coca Codo Sinclair hydroelectric plant’s oil spill. The plant’s poorly designed dam caused flooding, which in turn caused erosion — destabilizing pipelines further and causing more oil to spill.
Meet Melba
Melba Aranda of the Kichwa Sani Isla community in Ecuador is one of the Indigenous women whose ancestral land was ravaged by this oil spill in April of 2020. The oil flooded their lands, making it impossible for them to grow and rendering them without a way to feed their families. The oil companies responsible have not cleaned up their mess, despite their claims, leaving these Indigenous people to fend for themselves and try to find a way to survive the crisis as this toxic sludge invades their ancestral home.
In the past year, Melba and her community have faced immense hardship as they fight to survive — much of their water is now polluted, causing ulcerations on their skin when they come into contact with it. Their crops were destroyed and their cultivated land along with it, and they are experiencing severe health issues from exposure to toxic waste.
Further compounding the problem, this spill happened as the pandemic was sweeping across the globe, and Ecuador was not spared. The lack of food in the middle of COVID unnecessarily put Kichwa women's lives in additional danger: without their land, they could no rely on subsistence farming and were forced to risk further interactions outside their region to find food, opening the floodgates of even more tragedy as the virus descended upon them in their remote communities, wreaking havoc and especially impacting their elders. Imagine catching COVID and needing oxygen or medicine, having no food and little clean water, and having to find a way to get supplies by canoe: this is the reality of what these Indigenous people are facing, and what these brave women are up against as they fight for their communities. But we can do something to support their fight.
Your Mission
GISH is joining forces with Amazon Watch to help these Indigenous women and their families, but we need your help. Our goal is to help four communities (almost 500 people) to receive the funding they need to restore their land to health: providing seeds and supplies to produce cacao, corn, and cassava to support their families.
Together, we can support this incredible group of female fighters for good in their fight to help not only themselves but their communities. While Amazon Watch and other activists fight to restore their sovereignty and bring justice to them for all they lost, we can give them the opportunity to keep their families safe and healthy. DONATIONS ARE 100% TAX DEDUCTIBLE AND 100% OF THE DONATIONS GO TO THIS COMMUNITY (for countries other than the U.S., deductions are contingent on your laws).

Raised by 15 people in 4 months