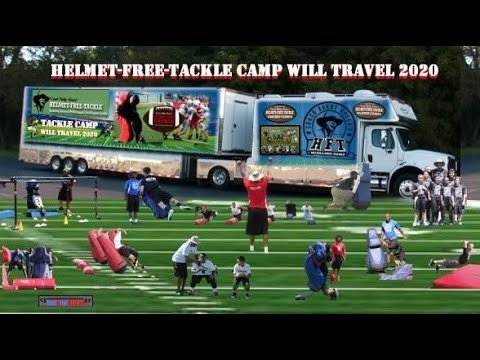 Call To Action:   You're invited to be a part of the greatest sport's Health & Performance breakthrough of the 21st century, the elimination of Helmet-Involved-Tackling from the sport of American Tackle Football.

The Beginning:  I'm a father first, and back in 1997 after becoming the head coach of my son's Pop Warner football team his first year of playing tackle football, I was no different than parents of today, I was scared to death of seeing my son or any of his teammates not be able to get up because they were paralylzed tackling the wrong way for me.

Times have changed:  In those days, concussion was not a familiar word, it was paralysis that everyone feared the most, brain injuries were called getting your 'bell rung" and not thought to be that serious by players and coaches.

The Gift:  So I prayed and asked the Lord to "teach me to teach them" and the very next day I created my Dip-N-Rip Sticks tackling technique to teach the kids how to tackle without initiating contact with the crown of their helmets, or exposing their helmets to contact while making a tackle during live football competition.

The founder of the Gridiron Heroes, Chris Canales, was paralyzed himself in 2001 making a tackle his serior year in a high school football game.  Chris told me that he still watches and loves football but, his and all the Gridiron Heroes greatest wish was not to have any new Brothers added to their Gridiron Heroes family.  (https://www.gridironheroes.org)

During that search, I also came across an American Academy of Orthopedic Surgeons October, 2000 medical report stating that, "Each year there were more than 448,000 reported football related injuries to youth under the age of 15, totaling more than $6.89 Billion dollars in medical, legal and liability costs.

The price of a second head impact to a child with an unreported, undiagnosed and untreated concussion, can and has cost children their lives.

That is a cost that is far too high to pay for playing a sport when it can be avoided all together.

You are needed:  Please support my Helmet-Free-Tackle Camp Will Travel Tour 2020 to help me Hemlet-Free-Tackle Safety Certify up to 5,000 children and coaches in under-served communities throughout Southern California.

The goal:  My goal is for the Helmet-Free-Tackle Safety and Performance Coaches Cetification to be established as the National Standard of Care for teaching tackling at the youth and high school levels of tackle football competition by the year 2024.

The Vision:  Your support for our Helmet-Free-Tackle Camp Will Travel Tour 2020, will serve to showcase the mechanism to tackle safety certify thousands of youth and high school football programs across the country by the year 2023.

Tax Deductable:  We are a 501 (C) 3, any and all size contributions you make are greatly appreciated and are 100% tax deductable where permitted by law.

History is calling you:  Be a part of the greatest sport's Health & Performance breakthrough of the 21st century, the elimination of Helmet-Involved-Tackling from the sport of American Tackle Football and the establishment of the Helmet-Free-Tackle Safety Coaches' Certification as the National Standard of Care for teaching tackling at the youth and high school levels of tackle football competition.

Thank you for your support.

Coach Bobby Hosea - Creator of the only Science of Tackling Safety & Performance of its kind in the World!