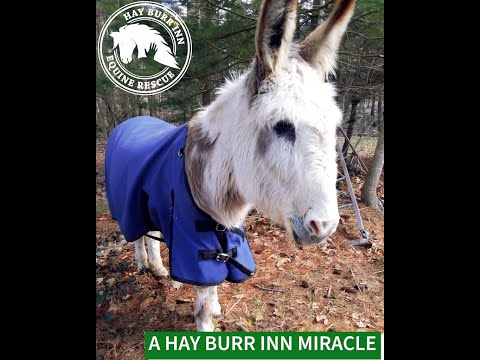 Save A Horse by Supporting Hay Burr Inn

Hay Burr Inn is a wonderful place where equines come to be rehabilitated or live out their lives. We are dedicated to saving the lives of horses that are victims of starvation, neglect, abuse, bound for slaughter, or whose owners are unable to provide for their needs. It is our goal to rehabilitate and restore the physical and emotional health of the horses and find them a loving home or continue to give them the special, intensive care they need to live out their days in peace.

When one begins a rescue, there is little thought to the type of illness that can occur or the hours spent on keeping the rescue animals alive.  Only the positive aspect of saving an animal and helping them become well-loved and cared for is thought about.

One of our rescues, Don Quixote contracted a deadly illness.  Don Quixote is very special to volunteers, visitors, and our social media family.  Don Quixote is a kind, stubborn, quirky donkey whom we call Don in honor of our Founder's father.  He is unique to Hay Burr Inn, as he is the only donkey we have rescued, so far.

Hay Burr Inn had a miracle last year, Don survived a deadly disease which kills most animals.  Due to a set of circumstances, luck, and a lot of sacrifice by numerous people and institutions, Don survived and is thriving!

This was not just any miracle, it was a miracle that was special to all Hay Burr Inn’s volunteers, visitors, and supporters.

This is Don Quixote’s miraculous story.

Donkeys are very stoic animals and when they become sick or injured, they will not show any signs or symptoms.  This is due to being a prey animal, predators hunt the weak, ill, and injured. During morning chores on the first inspection, it was thought that Don had a cold.  Don would not eat. There was copious amounts of mucous exiting his mouth and nose, shaking it all over stall walls and people.  He was lethargic, with drooping head and ears, and so sad looking.  We knew it had to be terrible.  Our veterinarian was phoned, she recommended to administer an antibiotic we happened to have on hand due to an earlier horse illness.  This was started immediately, and this was the first step of the miracle.

As no one knew the extent of Don’s illness we bleached everything in contact with Don, including ourselves.  We did NOT want a communicable disease to spread to the other 12 horses on-site. Keeping the contagion in check was a worry!

The next day, unfortunately, it appeared as if the antibiotic was not doing its job.  We knew something was terribly wrong as Don became worse, not better, and still not eating or drinking.  Don was becoming dehydrated. Our veterinarian was phoned again with the plea to come quickly, this was serious.

Our veterinarian arrived early afternoon and began to administer intravenous fluids to combat dehydration. Immediate IV administration was miracle number two. Then onto eliminating possibilities with amazing diagnostic ability, she realized it was poisoning.  Knowing poisons kill before a test can be given and read, knowing we feed round bales and pasture, and with Don's symptoms of not being able to swallow to eat or drink. Botulism was diagnosed.

Then the race was on to acquire the only thing that would save Don, the antitoxin! After numerous phone calls to area veterinary clinics, we thought of a nearby emergency equine hospital.  Thankfully, this was the same place our fantastic veterinarian did a rotation.  Our veterinarian is memorable, people remembered her and they were absolutely willing to help. Miracle number three. Unfortunately, this institution was over an hour away and time was of the essence if Don was to have any chance of survival.

Onto miracle number four.  Our Founder immediately phoned a good friend who was just leaving to visit her mother.  She and her husband were sitting in their car at the end of their driveway when she picked up the phone.  As always in an emergency, crying happens.  Through the tears, they understood what was needed and time was imperative. Their name was given to the institution, visiting mom plans were changed and they were on their way.  They drove, speed limits were broken, traffic was light, getting lost did not happen, antitoxin was ready and they were on their way back.

As IV line was being inserted, one of our volunteers came with the news concerning one of our miniature horses rolling on the ground. This behavior was something the volunteer was unsure whether this was normal.  The volunteer was asked to bring the miniature horse into her stall in the barn.  It was determined it was Oreo.  It so happens Oreo and Don have a strong bond; we joke that they are boyfriend and girlfriend.  We did not understand how strong their connection is.  Through the stress and worry of her friend’s illness, Oreo decided she was going to colic. Colic is an all-encompassing word to describe a terrible stomach ache in equines, which can be brought on by numerous things, one of which is stress.

We could attend to Oreo with her now in the barn in the vicinity of her friend, Don. Though, still administering fluids to Don. A memorable moment and testament to our veterinarian’s dedication in an emergency, as she ran by Oreo’s stall to collect fluid bags for Don she was heard to say to Oreo, “It is not your day to die; just hang in there, I will get to you in a minute.”  Oreo hung in there to also be administered an intravenous fluid bag with medication suitable for colic. Veterinarian and volunteers doing their best to save them at the same time. Two animals with IV fluids running and a moment to breathe when the antitoxin arrived.

Hopefully, no one else needs to understand the preparation for the botulism antitoxin to be administered. Suffice it to say it is like a science experiment, exact and a precise temperature to revive frozen anti-toxin and not make it unusable.  A two-person science experiment, all the while praying it works and we did not kill it.  There was no other available! Overwhelming responsibility which was executed to perfection.  Miracle Number five! The anti-toxin was administered through Don’s IV line.  Don was not out of the woods yet, but now he had a fighting chance.

This was hours of stress-filled anticipation administering medications for two animals. We could now take a moment to regroup and plan.  Mostly the plan was 12 hours of fluids into Don Quixote and a bag into Oreo.  It was now getting late afternoon and getting dark, our veterinarian spent untold hours with us and needed to leave.  As it gets dark in New England in winter the cold gets more bitter.  Due to the IV fluids administration, most animals shiver. No matter what, the temperature of the fluids is not as warm as body temperature.  Don was shivering.  We attempted covering with blankets but it became cumbersome.  So we decided to purchase an electric blanket for him.  One of our volunteers went immediately for the blanket, miracle number six! Forgetting, our Founder was facing days of round the clock care in frigid winter temperatures.

Our Founder spent countless hours, with Don, whether it was midnight or four in the morning. Mind you, this was winter, of course, the temperatures were below freezing, Don was nestled in a heavy heated blanket doing his best to fight through this. All while Hay Burr Inn’s Founder was shivering, sleep-deprived, and trying to keep Don’s fluids and IV line and needle from freezing,  by covering with hand warmers and towels, and not able to leave him unattended with an electric blanket plugged in.

It was constant care, never really knowing if the antitoxin was working!!  Until the next afternoon when Don was seen nibbling on some wet hay, attached to IV and under an electric blanket!  Miracle number seven!  A video was taken and sent to our veterinarian.  This was when we absolutely knew the antitoxin did its job!

Don Quixote needed days of IV fluids to help combat botulism poisoning as well as numerous injections of antibiotics.  We knew when he was feeling better, as he began to not appreciate our visits with the needles.  As he felt better, he also became adept at removing his IV until we finally gave in after weeks of fluids and decided the last time he removed the IV, we would not insert again.  We were being extra cautious with medications because our veterinarian told us this was the first animal of any species she knew survived botulism poisoning. Any species can contract it, even humans. Her other experiences all passed away. So, soaked hay, more fluids, more antibiotics.  After a month of administering, the antibiotic bottle was not finished because Don was so hard to catch and so sad when he saw the needle coming.  It took us quite a while to regain his trust. Botulism is not something to think is mild, and yet there is no knowing when it is in our soil or feed.

We vaccinate our donkey and every one of our horses each year for botulism.  Botulism is a rare and fatal illness that kills most animals. It can be found in food, hay, and soil. It produces a toxin that can lead to severe poisoning. Every now and then there are the lucky animals that survive botulism.

Don is stubborn (or cautious as our Founder likes to say), in so many ways.  We are truly grateful for his stubbornness because despite everything he has been through he is thankfully still alive. Don is the only animal our veterinarian has experienced survival of botulism after treatment. Our dedicated volunteers, founder, veterinarian are to thank for Don’s health.  Without them, he would not continue to be the amazing funny little donkey you all know and love.

Veterinarian bills can be one of our biggest costs in addition to the daily cost of grain, hay, and bedding.  We take in horses that already have ailments are older, and untrained.  We treat them to keep them comfortable and treat anything else that befalls them throughout the end of life. We never know how long they will be with us.  We make sure our equine friends are comfortable and we make every day count!! It is not easy taking care of animals at the end of their lives.  However, we know they deserve the best care we can provide and it is through people like you who donate, volunteer, and support us that we can continue to do this.  So, THANK you!  The horses thank you and donkey thanks you!

To continue to have amazing success stories like Don Quixote’s we need your help!

We cannot do this alone. COVID has had a major impact on the fundraisers we would normally have had though out this year, but you can make a difference.  You can help our equine friends.

Please consider donating and helping to continue to care for the equines.  We could not do it without you!

Donations can be made online at: https://www.hayburrinn.org/sponsorships-2

Or you can mail in your donations to:

ALL DONATIONS HELP SUPPORT OUR EQUINES!!!