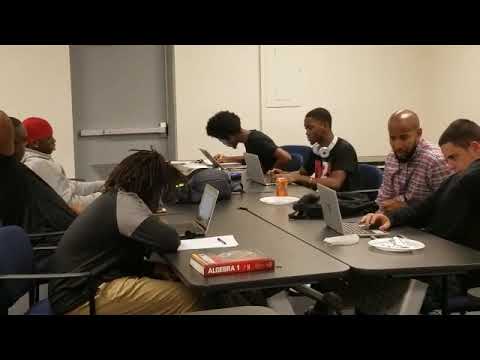 The literature is replete with studies, reports, and statistics showing that boys raised in single parent homes are at risk in a number of areas. The U.S. Department of Health reports that fatherless homes are responsible for 63% of all suicides among youth.  In addition, the rates of chemical dependency, commission of crimes, psychological disorders and dropping out of school are all dramatically increased among children from single family households.

Rick Dunn, founder of Men2Boys, looked past the high school athletes he was coaching and saw young men facing challenges, and tough decisions. He saw boys with no father figure who needed someone to reach out to them in some meaningful way, to provide encouragement they might not be able to get elsewhere.

So, in April of 2010, Men2Boys was born. Since then, the program has held a number of events and reached out to over 600 boys from twenty cities in Southern Florida.

One of these events was the Entrepreneurship Workshop. In this six week program, the boys learned the importance of entrepreneurship and discussed the opportunities available to them in their “internet generation”. They also began to get comfortable with business terminology, a factor which would open not only business, but also educational doors for them later on.

The boys discussed business ideas, then choosing one, developed a business plan. From there, they determined how their business would be financed, marketed and operated. And, as a very important side note, they discussed how to handle success.

It was clear they had been listening. These boys gave up two to three hours every Saturday for six weeks during their summer vacation to attend this workshop. The talented instructors, both young entrepreneurs themselves, volunteered their time for the boys.

Thus far, everything Coach Dunn has done with Men2Boys has been in keeping with the belief that “Information changes Situations”. Men2Boys “Core Five” message includes; a) Believe in a Dream, b) Focus on your “Choices & Decisions” c) Understand the Importance of Education d) Develop your Maturity, and e) select your Friends, and manage your Relationships.

Rick Dunn has accomplished a feat of greatness with Men2Boys. Not only has he put together an outstanding program for young men to come and learn and at mentored, but, more importantly, he has gotten them to come and be a part of the Program. Apathy is one of the great dangers that faces our youth. Rick Dunn has found a way to overcome it, if only a handful at a time. But that handful soon becomes a gym full, then a school full. He’s started it rolling with no signs of slowing.

Visit Men2Boys’ website at http://www.men2boysmentoring.org/and always remember, “Each one, Reach one.”