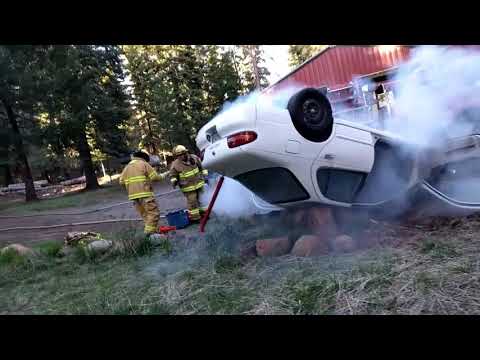 Anyone who lived in Southern Oregon in 2014 remembers the Oregon Gulch Fire.

Sparked by lightning on a hot, dry day in late July, this fire quickly turned into a conflagration. Oregon Gulch ultimately consumed about 35,302 acres, nipping the southeast corner of the Cascade-Siskiyou National Monument and the edge of the rural mountain community known as the Greensprings.

Volunteer firefighters from Greensprings Fire and Rescue (GSFR) were the first ones on the scene of this fire. They protected many homes and helped residents evacuate safely, and worked with other agencies to monitor and eventually “mop up” the fire.

But GSFR firefighters were also first on the scene of many incidents before and after Oregon Gulch—incidents no one has ever heard of, because the fires were stopped before they could ever “blow up.” These brave volunteers do this work—sometimes without recognition, and always without pay—because they believe in helping their community.

In the 15 years since our founding, GSFR has always relied on voluntary donations and memberships; we do not receive county or state tax revenues. Fundraising events like our “Spooky Bingo Nite” have been especially popular and account for a good chunk of our annual budget.

But COVID-19 has ground our fundraising efforts to a halt.

To honor social distancing guidelines and protect our community, we have canceled both our March Bingo Nite event and our Annual Meeting in May, which has traditionally served as our Membership Drive.

Faced with the challenge of raising funds from a distance, we have turned to GoFundMe to make up the deficit. Your tax-deductible donation will help equip our firefighters and keep them safe, and support the vital operations that enable us to train and respond to wildfires and many other incidents.

Our all-volunteer agency covers a huge service area in Jackson County, Oregon, from the California border to Dead Indian Memorial Road to the north, and between Soda Mountain and the Klamath County line to the east.

Our service area includes a large portion of the Cascade-Siskiyou National Monument. Recognized for its “outstanding biological biodiversity,” the Monument serves as a refuge for an astounding range of plants and animals, including over 100 butterfly species. Much of its 114,000 acres is forested, making it a valuable carbon sink. Unfortunately, decades of fire suppression has caused an unnatural and dangerous build-up of fuels here in the Monument and around the homes of our rural residents. As everyone who lives here knows all too well, the region is vulnerable to the risk of catastrophic fire.

We are often the first firefighters on scene of a wildfire; our actions can mean the difference between a small incident and a conflagration, protecting not only the human community, but the treasure of public lands which belongs to us all.

Every year, the CSNM and mountain lakes attract more visitors, as people escape the Rogue Valley heat to hike, fish, hunt, and camp. While welcome, the increased traffic translates into busier summers for us. With the nearest hospital at least 45 minutes away, our role as first responders is vital. Whether identifying a stroke victim, readying a landing zone for a Mercy Flights air ambulance, or performing CPR, our actions can mean the difference between a good or poor outcome—and sometimes, between life and death.

As if the challenge of COVID-19 weren’t enough, we are anticipating an early and dangerous fire season here in Southern Oregon.

We have launched this campaign to coincide with "Giving Tuesday"; if you give before May 5th, your tax-deductible donation may be eligible for a matching donation from GoFundMe/Charity.

Thank you for supporting GSFR, and in turn, the many people who depend on us.

The IRS will consider your receipt as valid documentation of your donation to a qualifying charity.

Posted by Greensprings Fire and Rescue