THIS PAGE IS NOT ACTIVE- GO BACK TO THE PAGE YOU WERE ON, SCROLL DOWN TO BUY GALA TICKETS

THIS TICKETING PAGE IS NO LONGER ACTIVE.

PLEASE GO BACK TO THE PAGE YOU WERE ON AND SCROLL DOWN (DO NOT CLICK THE BUTTON THAT BROUGHT YOU TO THIS PAGE) AND YOU WILL SEE WHERE TO PURCHASE YOUR GALA TICKETS TO "A NIGHT UNDER THE TENT" GALA.

WE ARE TRYING TO FIX THIS PROBLEM AND DELETE THE BUTTON THAT BROUGHT YOU HERE.

In 2016, Going Places founder, Katie Blomquist, was a first-grade teacher in a low-income elementary school. She had a 6-year student named Jawan who wanted a bike for his birthday and it shocked Katie to learn he had never owned one. She wished she could buy him a bike, but that wasn’t possible on a teacher’s salary. It was something that Katie couldn’t get off her mind knowing Jawan was growing up without the Joy of riding his own bike.

As Katie started to ask around her class, she realized that most of the kids had never owned a bike. Remembering her own childhood filled with joyful memories of riding her bike all around her neighborhood, she set out to change this sad realization. Katie had the idea to buy all 650 students in her school a brand new, high-quality bike by starting a GoFundMe campaign.

Katie’s campaign went viral and some of the top news outlets in the country reported on it including Good Morning America, The Today Show, NBC Nightly News with Lester Holt, ABC World News, Time Magazine, USA Today, Post and Courier, and The Steve Harvey Show. The story behind Going Places was catching on fire throughout America. On March 30, 2017, she surprised every student at Pepperhill Elementary School with a brand new bike. After this successful event, Katie now had an even greater vision.

Her vision was to create a nonprofit whose mission was to bring Joy to children in need. To make that a reality, Katie would have to focus her efforts full time on this new venture, which meant stepping away from teaching. In June 2017, she got to work on building the dream of Going Places, which involved rallying the community around her cause. It was important to Katie that her supporters understood why there was a need for Joy in these children’s lives.

Numerous organizations focus on providing the basic needs of food, clothing, and shelter, yet one thing often overlooked for children is their social-emotional need for Joy. For many kids living in poverty, it is when they get home from school that the real stress begins. So why a bike?

These kids can live in less-than-desirable and unpredictable circumstances and a bike provides them with a sense of freedom and escape. It also builds self-worth by being the first item of value they can call their own. A bike can restore the innocence of childhood that many have had taken away.

A person may have all of the basic "needs" in life, but what kind of life is one without Joy? What kind of adult will a child grow up to be if they have lacked Joy?

We invite everyone in our community to join us on this ride of providing Joy to these children in need and letting them know that they deserve to go places in life. 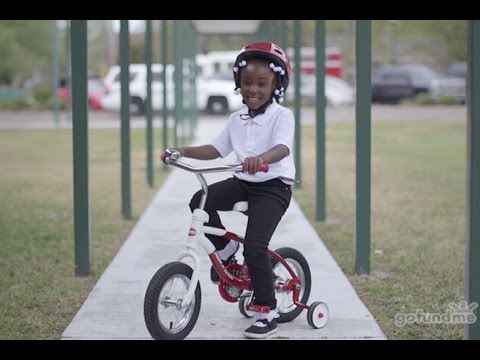