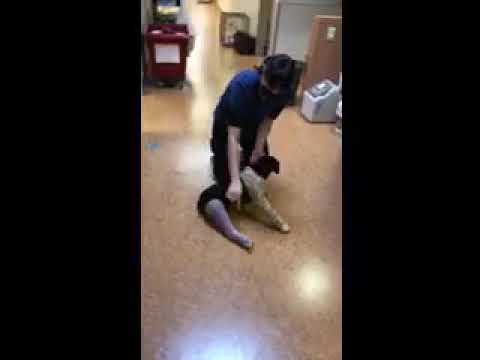 Raised by 75 people in 7 months

On October 27, 2020, Sacramento County Animal Control received a call regarding a dog that was hit by a car. After searching for over an hour, they finally found a 4-month-old Dobermann Pinscher puppy clinging to life in a ditch. Upon arriving at the shelter, it was determined that he had sustained life-threatening injuries, including lung contusions, substantial lacerations, and both his right tibia and right humerus were fractured. The shelter veterinary team worked tirelessly to stabilize him, but shelter staff  was told not to get their hopes up that he'd pull through – that's how substantial his injuries were.

For three days, it was touch-and-go, and even though his pain medications were at the maximum his little body could handle, he was still in so much pain that he would scream for hours. It was heartbreaking for the veterinary team and shelter staff, but they weren't going to give up on him. It seemed the only thing that would give him comfort was to be held by shelter staff – so that's what they did.

Slowly, he began to stabilize, and the shelter staff could breathe a sigh of relief. At first, shelter staff had to help him walk, but he gradually gained enough strength to go into a fabulous foster home, facilitated by Sacramento Shelter Pets Alive (SSPA). His foster mom named our little fighter after the greatest hero of Irish mythology, Finn MacCool, an intrepid warrior with mystical, supernatural powers. After weeks of love and physical therapy, Finn was transferred to another foster home to continue his recovery.

Unfortunately, despite the shelter medical team's best efforts, Finn's right rear leg did not heal correctly, and it was determined that he needed to see a specialist. Finn went to see a specialist at VCA Sacramento Referral Center on January 11, 2021. It was determined he needed to undergo corrective surgery to fix a patella luxation, which is currently scheduled for February 11, 2021. The estimate to repair his leg, which will give him the best chance to live a happy, normal, pain-free life, is $4,800.

Despite all he's gone through in his short little life, Finn flourishes in his foster home. He's learning that kitties aren't for chasing and that his foster sissy (an American Bully/American Pit Bull terrier mix adopted from the Bradshaw Animal Shelter in August of 2019) is the best thing ever! He loves his toys, patrolling the backyard, and snuggling with his foster mom.

Please help donate to Finn's care to help him receive the corrective surgery he needs!

Any funds not ultimately required for Finn's care and recovery will be added to TEAM's Special Medical Needs Program, which funds specialized veterinary treatment for injured and neglected animals that come to the Bradshaw Animal Shelter.

To see other videos of Finn check out our YouTube channel at https://www.youtube.com/channel/UCQTzwXt3_2dmDbtHrlSbJ4A

Raised by 75 people in 7 months