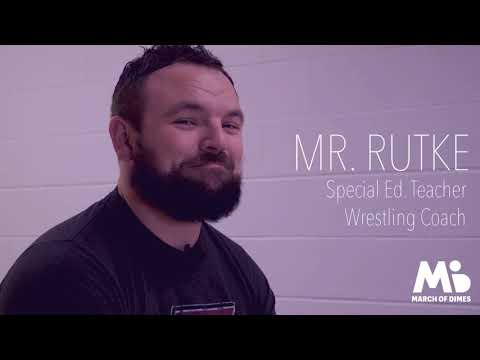 Our sweet Finn came into the world at just 29 weeks and 2 days gestation. After a very normal pregnancy, Finn's mom started having contractions and went to the hospital get checked out. Less than 30 minutes of being hooked up for observations, her water broke, and less than 2 hours after that, Finn arrived and was ready for the fight of his life.

Finn was rushed to the Neonatal Intesive Care Unit in the hospital. His incredible care team immediatly went to work. He was intubated for 9 hours and then spent 5 weeks on an oxygen canula. When Finn was born he weighed 2pounds, 15 ounces and was 15 inches long. He fit into the palm of his dad's hand. While Finn never struggled to gain weight, he still had his ups and downs with other aspects. Like most babies born at his gestation, he had daily bradycaria episodes, which is where his heartrate gets too low. He was diagnosed with a level 3 intraventricular hemorrhage on the left side of his brain which resluted in daily head circumference mesasurements and bi-weekly head ultrasounds. Finn also struggled to learn how to "suck, swallow, and breath" while eating. It took 4 weeks for Finn to become an expert on eating from a bottle.  His mom thinks he just loved his nurses so much that he wanted to stay with them until they kicked him out. Finn graduated from the NICU on his 2 month birthday after 61 days in.

Finn is now an extremely happy and healty 6 month old. He is eating solids and trying to feed himself, rolling over, working on sitting up independenlty, and smiling at everyone he meets,  which are all things 6 month olds should be doing. His bradycardia subsided before discharge and his intraventricular hemorrhage has pretty much resolved. Now you can find Finn Thursday nights supporting The Menomonee Falls Wrestling team because his dad is the head coach!

While Finn is doing amazing, we still do not have answers to why he came early. All the doctors know is that his mom had a "spontaneous rupture". This is not ok, and his parents deserve answers. March of Dimes is dedicated to helping find answers so all babies can be born full term, or after 37 weeks gestation.

March of Dimes research and funding allowed Finn to have the best possible start given his situation. We're  raising money to fight for the health of all moms and babies.  It would mean so much to us if you could support our campaign with a donation.

March of Dimes believes that every baby deserves the best possible start. So do we. It takes only seconds and any donation is appreciated. Donating allows March of Dimes to continue to advocate for policies that prioritize the health of families and build a brighter future for us all.