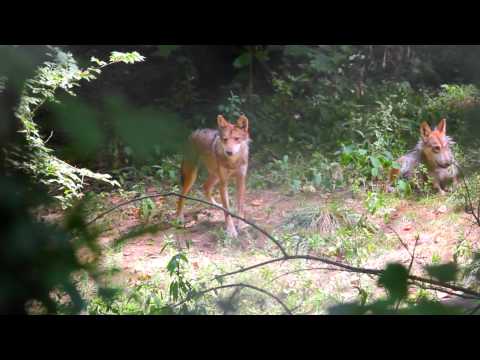 Raised by 72 people in 3 years

Many of the animals in our care came to the Endangered Wolf Center bringing with
them inspiring stories of courage and determination, having overcome great obstacles. For their pups, the greatest chapters of their stories have yet to be scripted, the wild
awaiting their arrival with less than welcoming arms. Whether the role they will play in the survival of their species will be in the safety of our care or on the grand, dramatic stage of the last great wildernesses, you have an opportunity to play one of the most important roles in their future. You can help make a difference!

Our Vision and Mission:

Our vision is a world where endangered wolves and other wild canids exist and thrive in their native habitats, recognized and valued for their vital roles as leading members of a healthy ecosystem.

Our mission is to preserve and protect Mexican wolves, red wolves and other wild canid species, with purpose and passion, through carefully managed breeding, reintroduction and inspiring education programs.

Meet a few of our Pack Members:

Rogue was born at the Endangered Wolf Center on May 20, 2013. She is our “lucky 13,” also being the 1,300th Mexican wolf born into the recovery program since it was initiated in 1982 – a remarkable feat for a species that once had a breeding population of just seven individuals.

Anna was the only surviving pup of the pairing of two legendary wolves. Santa Ana, her father, was one of the last pure Mexican wolves from the Ghost Ranch lineage. He was recovered after the species was declared extinct in the wild in 1980, making him the most genetically important animal of his species at the time. Anna was born on Earth Day, April 22, 2001. Despite her efforts as a new mother, Tanamara lost two of three pups from this litter – wisely, the decision was made to hand-rear the third pup, Anna. Because she had been hand-reared, Anna was not releasable in the wild. Still, her role in the wild is unmatched. She gave birth to 41 pups in four separate litters of record-breaking numbers. Several of her offspring now live in the wild. Others remain in our care at the Center as part of our Saving a Species breeding program.

Sibi hides scars from a tragic story no one knew of when she first arrived at the Endangered Wolf Center from a preserve in Mexico. That was until one day, when she started limping. X-rays found foreign particles in her wrist and all over her body. Sibi had been shot. The particles turned out to be buck shot, concentrated in two areas around her face and rear. While the thought of an endangered wolf being shot inside what should have been a protected area for her is upsetting, it’s also the harsh reality wild wolves live with every day. Sibi is a brave symbol of the struggles of this misunderstood animal, a keystone species essential to the future of the ecosystems that depend on them.

Raised by 72 people in 3 years