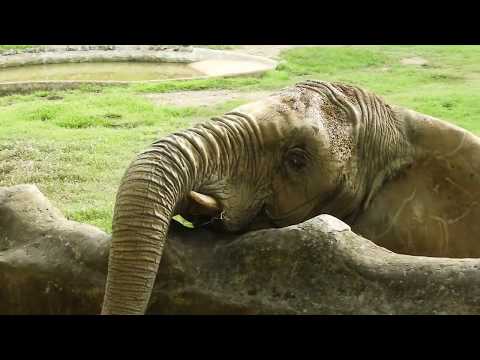 Let's Build a Barn for Our New Elephant Refuge!

We’re close to our goal for building the barn - help us reach the finish line. Every donation, no matter the size, will help give Mundi a chance to rediscover her "elephantness."

Thank You Nature Defense Foundation! And a huge thank you to all of our supporters who helped reach the goal of raising $50K by June 30. Because of your generosity, we succeeded in meeting the Nature Defense Foundation matching grant challenge and have an additional $50K going toward construction of the elephant barn. That means in just two months we raised $103,769!

MUNDI THE ELEPHANT IS RETIRING TO HER NEW GEORGIA HOME: AND YOU CAN HELP!

In August 2017, the Governor of Puerto Rico contacted Elephant Refuge North America (ERNA) and requested that it receive Mundi, a 34-year-old female African elephant.  For the past 29 years Mundi has lived alone at the Puerto Rico Zoo.

ERNA’s South Georgia landscape and climate are tailor-made for elephants. As an elephant in the prime of her life, Mundi will flourish at this next generation of sanctuary. It will be the first time in her adult life that she will experience a habitat that allows her to live fully as an elephant. The same will be true for the elephants who follow her.

HOW QUICKLY MUNDI CAN MOVE TO HER NEW HOME IS UP TO US, AND HOW FAST WE CAN RAISE FUNDS TO BUILD HER BARN.

The Founding Herd is a special team of EAI supporters with a goal of raising $1,000 each toward the barn and Mundi’s move. When you raise $1K, you'll become a founding member of the barn build. Your name will appear on a permanent plaque and you'll have access to special videos and photos of the project. Plus you'll have our support - from email examples to social posts and more - to help you invite your friends and family to join you in reaching your goal.

PERKS for Donors and Campaign Leaders Include:

- $1K Donation or Raise - Your name engraved on a permanent “2018 Barn Builders” plaque at ERNA. Each fundraiser will receive special video updates of the barn build.  Founding Herd members also get access to a screening link for the award-winning documentary UNCHAINED.

- $5K Donation or Raise - Calling all student fundraisers (K-12/college or university): when you help us raise $5,000 or more, Carol Buckley will speak at your school along with a screening of the award-winning documentary film "Unchained."*

- $25,000+ Donation or Raise - Four people can receive a personal tour of ERNA and lunch at Elephant Lake hosted by EAI Founder Carol Buckley. A preview of the site before the elephants arrive, this is a unique educational and truly rewarding experience.

*Date to be determined based on mutual convenience/availability

CLICK HERE to JOIN THE TEAM and launch your own fundraiser. You’ll get tips and tools, our team member Shannon is here to support you in reaching your goal.

Every donation makes a difference and gets us closer to our goal of completing the barn and moving Mundi to her new home at ERNA where she will flourish and thrive.

Everything is in place:

- The land is secured,

- The foundation is laid,

- And the barn is in progress.

Our ultimate goal is $455,000: which covers the entire cost of this specially designed three-stall hospital barn project from start to finish.

ERNA has the capacity to house up to 10 elephants, retired from zoos, circuses, or other captive-held environments.

Help Mundi to retire in elephant paradise, and join us in creating a world-class sanctuary for elephants to rediscover their “elephantness” surrounded by new friends, and to live every day to the fullest.

Why does ERNA need an elephant barn?

Elephants retiring from zoos and other captive environments need an opportunity for transition to a life of autonomy. The barn will serve as an initial home base for new arrivals as they settle in and become comfortable enough to venture out and explore ERNA’s 850 acres.

The barn will also be ERNA’s central location for rehabilitation, quarantine, care and observation of elephants in need of veterinary and hospice care. It will provide space for caregivers to prepare food, observe the elephants non-invasively and monitor the residents’ behavior and interactions.

Any structure built for earth’s largest land mammals has to be larger than life and elephant proof! Everything in an elephant barn must be bigger and stronger than in a normal barn and high enough to be out of reach of curious trunks.

You can learn more about the design and special features of the elephant barn here.

What is Elephant Refuge North America?

Wild-caught elephants living in captive environments in North America need a natural-habitat home, where they will not merely survive, they will thrive. ERNA will be home to as many as 10 female elephants retired from zoos and circuses.

Located in Attapulgus, Georgia, ERNA spans 850 acres of gentle rolling hills, lush pastures, dense forests, spring-fed lakes, creeks and streams, with a climate that will allow elephants to remain outdoors 24/7 almost all the year. It is the perfect place for elephants to regain their “elephantness” and develop loving bonds with other elephants and caregivers.

You can learn more about ERNA and our approach to elephant care and rehabilitation here.

Mundi is one of 63 African elephants brought to the United States by eccentric millionaire Arthur Jones in 1984. When the young elephants were orphaned in a mass culling organized by the Zimbabwe government, Jones orchestrated a mission to bring the orphans to his JumboLair estate in Ocala, Florida.

In 1986, the captive-held herd was disbanded. Still babies, the elephants were sold to zoos and circuses, and to private individuals as pets.

Mundi and another elephant named Nosey were sold to and performed in the El Mundo circus in Puerto Rico together. Two years later, Nosey was sold to the Liebel Family Circus, while Mundi, who is blind in one eye, was donated to the zoo in Mayaguez, Puerto Rico.

Mundi has been on display at the zoo since 1988. For nearly 30 years, she has lived alone in an area of about 15,000 square feet, with access to an enclosed shelter. She has several loyal caregivers, one who has been with her for nearly 18 years. By all accounts, Mundi is the main attraction at the zoo.

In a forward-thinking move, Puerto Rico’s government made the decision to retire Mundi to ERNA. We applaud the government for putting Mundi’s needs first.