Our mission is to stop the destruction of our park.

Starting this fall, New York City will demolish our big, beloved park on the unwealthy side of the Lower East Side and East Village. Everything must go–shady lawns, picnic areas, ballfields, running track, amphitheater, the compost yard, historic buildings, and 1,000 trees.

The city is determined to go ahead with the $1.45 billion ESCR–East Side Coastal Resiliency–even with the budget in desperate shortfall and despite the desperate need during this pandemic for outdoor recreation at safe distances.

The city will build a 1.2 mile seawall and cover the park with eight feet of landfill for flood control.  It will also cause a health crisis for our already suffering neighborhood with many people of color, elderly and low-income residents. It is an environmental disaster and an environmental injustice.

There are better plans that will preserve our park and give us flood protection.

After Hurricane Sandy raged through New York in 2012, the community worked for four years with officials to plan flood control. Flood walls and berms (long hills) would be built along the FDR Drive for storm surge protection. The park itself could be flooded during a hurricane. It would help absorb the overflowing waters and quickly recover. It would cost about $770 million.

In late 2018, the city suddenly decided the whole park should be erased to build a giant levee with a new park on top.

They will close 60 percent of the park this fall, demolish it, then close other sections as they reopen completed areas. It is scheduled to take five years (but when has NYC ever done anything on schedule?) and cost $1.45 billion.

An adaptation of the earlier plan should be our solution. 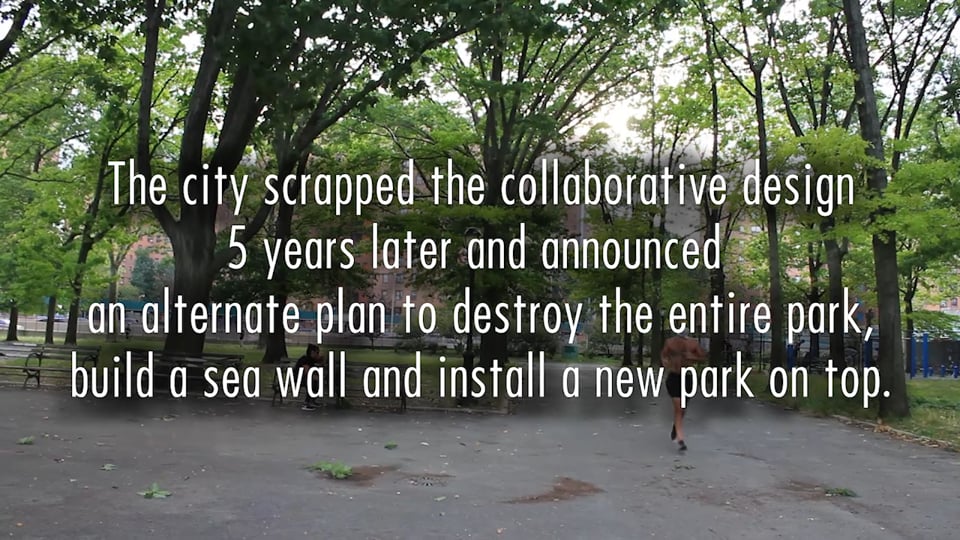