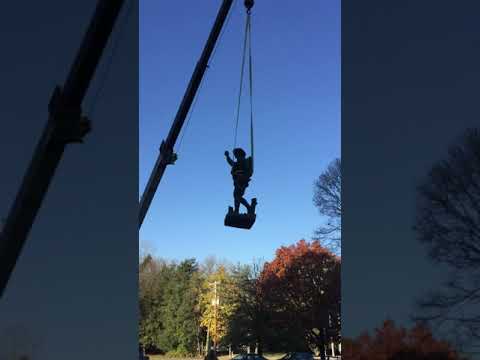 Raised by 15 people in 7 months

Wheeling's Doughboy Monument has stood guard vigilantly at Wheeling Park, day and night, season after season, since Memorial Day, 1931. Those nine decades of fluctuating heat and humidity, snow and ice, and rain and wind, combined with unfortunate acts of vandalism have taken a heavy toll.

Missing his rifle, covered with dents and dings, his pressed copper surface pale green with corrosion, our Doughboy was badly in need of a makeover.

This past November, the Wheeling Doughboy Restoration Committee made arrangements with veteran conservator Giorgio Gikas of the Detroit-based Venus Bronze Works, Inc., to restore Lester to a condition as close as possible to his original self. Gikas has restored at least seven other Doughboy statues throughout the Midwest.

When all work is completed, the monument will return to Wheeling in time for a Memorial Day 2020 re-installation.

And when he returns, our Doughboy also needs a dignified place to stand for the next century. His pedestal will be refreshed with a cleaning and resetting of the granite back, the creation of a wheelchair accessible walkway, and new landscaping in the area surrounding the statue.

Of course, all of this costs money, and the Wheeling Doughboy Restoration Committee asks that you consider supporting this worthy project. As the engraving on the Wheeling Doughboy’s granite base reminds us, this monument was dedicated in honor of “all who served,” meaning the hundreds of Wheeling men and women, who went off to fight in 1917-18, many of whom did not return from that terrible war.

In the years since, the monument has come to symbolize the sacrifice and service of all veterans.

Any amount will help us reach our goal. So please consider making a donation, big or small, in honor of all who served.

The WALS Foundation of Wheeling is acting as a pass through for this campaign. All money donated will be transferred to the Doughboy Restoration Fund.

Raised by 15 people in 7 months