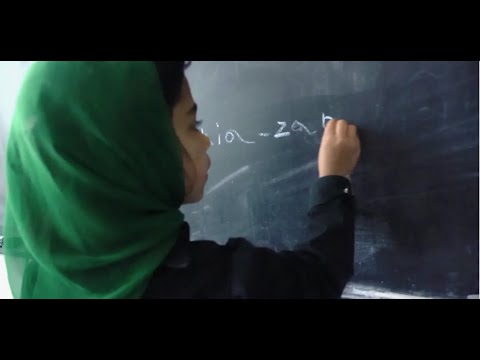 Diplomas Not Dowries: Educate Girls, Save The World

CNN Hero, Razia Jan, grew up in Afghanistan and came to the US as a young woman to pursue her educational dreams. She ultimately became an American citizen, opened a small business and raised her son here in the U.S.

She was the only Afghan woman in her American neighborhood and, after 9/11, Razia’s friends and neighbors turned to her with their questions about Afghanistan. It motivated her to organize community-led humanitarian projects that fostered connection between the United States and Afghanistan. When Razia visited Afghanistan after many decades away the country was almost unrecognizable; women had been forced by the Taliban into domestic servitude and illiteracy. Her mission became giving a new generation of girls the educational opportunities that she had been lucky enough to have herself.

Razia’s new dream was to open a girl’s school and rebuild the country, one educated girl at a time. In 2008 the school opened its doors welcoming its first 100 students. Today, Razia’s school has over 700 girls, from kindergarten all the way through the 12th grade. This 100% free, private school runs entirely on donations; donations that come from people like you. The school is so successful that there are hundreds of families who have put their kindergarten-aged daughters on the waitlist, desperate to give them their only chance at an education. In 2019 it was named one of the top schools in the country by the Afghan government.

Razia’s school has changed the mindset of the whole community. Fathers and village elders, who were originally against building a girl’s school, are now some of the school’s most passionate supporters, overseeing its safety and enrolling all of their daughters.

The school has so much community support that Razia was able to build a post-graduate school next door, the first women's school of its kind in rural Afghanistan. Just last year, the school graduated its first class of certified midwives who go on to work in their village; providing much needed maternal health care to local women and giving the graduates themselves a clear pathway to sustainable employment, making them breadwinners for their family.

COVID-19 has disrupted all of our lives, but in Afghanistan, if a girl is forced to drop out of school for too long, the risk is enormous. When our girls are not in school, they face the likelihood of being married off as young as ten or eleven years old. Education is the only thing that breaks the cycle of illiteracy and poverty for women.

These girls need your help so they can fulfill their dreams of becoming doctors, teachers, scientists, and future leaders of the world. Once a woman is educated, she educates her daughters, a gift that can never be taken away. When you support this incredible school you empower hundreds of young, brilliant women, you create generations of change.