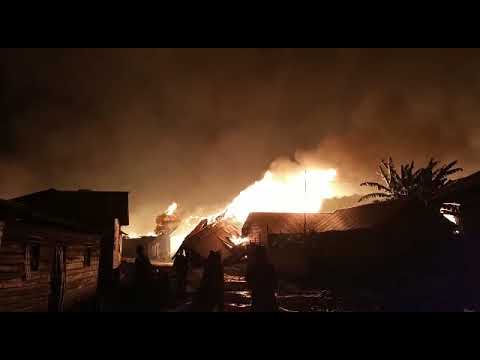 In the North Kivu province of the Democratic Republic of the Congo, near the capital city of Goma, Mount Nyiragongo erupted on May 22, 2021. It is one of the most active and dangerous volcanos in the world (the last major eruption, in 2002, killed 250 people and rendered over 100,000 homeless). The eruption and spewing lava this weekend took the lives of dozens of Congolese, drove much of the population across the border into Rwanda, and resulted in many missing and displaced people. Around 500 homes were flattened and 100 children are missing according to UNICEF. It also led to earthquake tremors on Monday, which shook the capital city of 2 million inhabitants.

In collaboration with our long-term partner in Goma, Yole!Africa, we launched this campaign to support people in need in North Kivu. We recognize there are many avenues through which you can donate. This campaign is specifically for people who are interested in making a local impact that supports families who are typically ineligible for or unable to access funding from large-scale donors.

For context, Yole!Africa was founded in Goma after volcano Nyiragongo erupted in 2002, leaving thousands of people homeless in an already volatile environment of war and political instability. This is a primary reason Yole!Africa established the center in the region—to provide space, resources, skills, and community-building activities that empower locals to enact long-term, sustainable solutions to the compound issues the region faces.

In that spirit, Yole!Africa’s response to this most recent volcanic eruption is an extension of the center’s 20-year legacy of community-determined support that empowers long-term sustainable change. Specifically, any funds we raise will be used in three ways: (1) to provide a network of reliable information for local communities to assess needs;  (2) to identify viable sources of international support for families and individuals; and (3) to offer short-term relief (in the form of direct grants as well as land, studio, and equipment access) to families particularly those reliant on artists, farmers, and educators, whose livelihoods have been dramatically impacted by the volcano.

We are grateful for your awareness and concern for families whose lives have been impacted by the volcanic eruption and thank you for any support you can offer at this already challenging time!

Posted by Friends of the Congo

Friends of the Congo

Friends of the Congo